3 killed in sea tragedy; where was Coast Guard?

CEBU. In this photo from the Philippine Coast Guard in Manila, PCG rescuers and crew of responding vessels attend to rescued passengers of the ill-fated MV Lite Ferry 16, on a ferry that responded to the distress call. (AP) 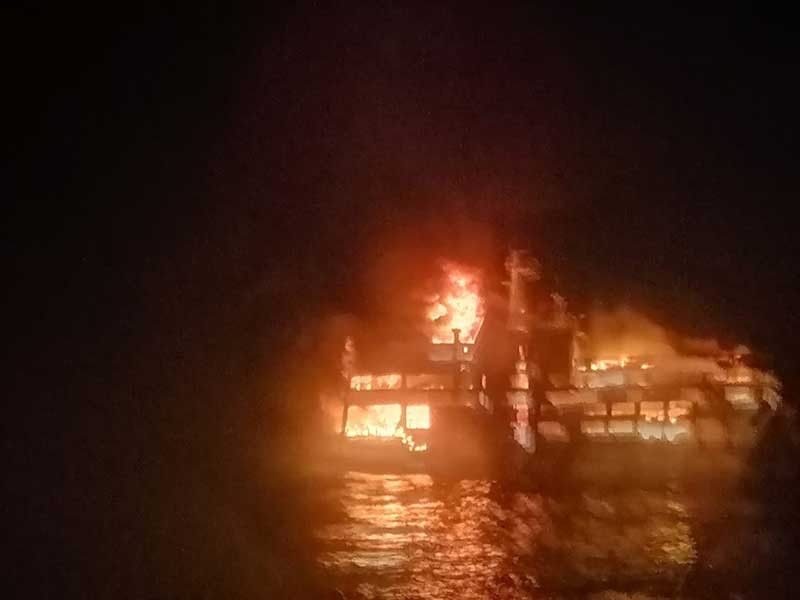 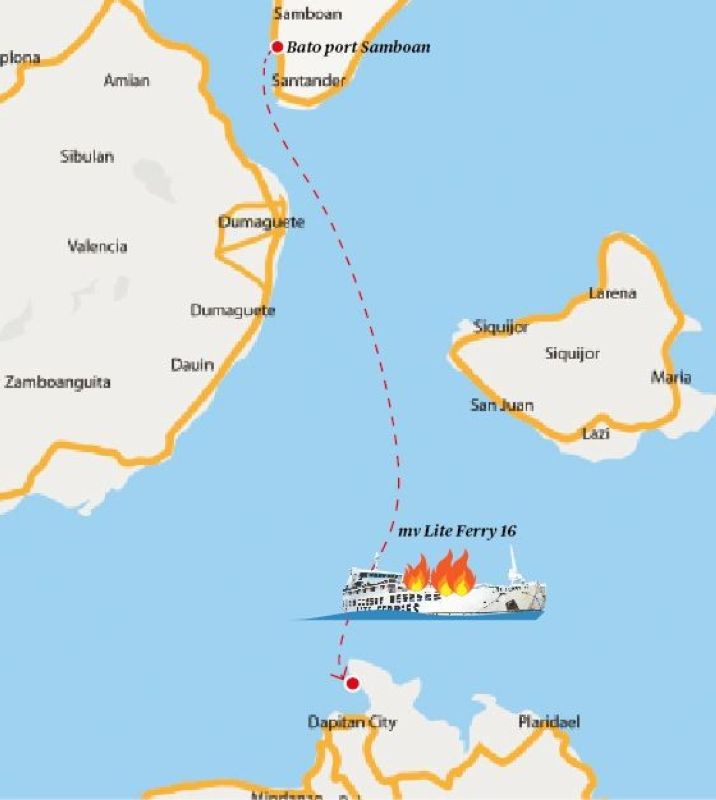 THREE passengers perished, including an infant, when fire broke out in the engine room of a ferry from Cebu just two hours before it was expected to arrive in Dapitan City, Zamboanga del Norte on Tuesday night, Aug. 27, 2019.

Because of discrepancies in the number of passengers in the manifest and the number of people rescued, the Philippine Coast Guard (PCG)-Cebu Station could not ascertain yet if any passenger was missing.

However, the PCG-Dapitan Station recorded a total of 245 passengers and crew members who were rescued as of 6:30 p.m. on Wednesday, Aug. 28.

Authorities have yet to identify the three fatalities.

Apple Agolong, tourism officer of Dapitan City, said in a Facebook post that one of the fatalities was a 60-year-old passenger. A one-year-old child also died.

The mv Lite Ferry 16 caught fire approximately 1.5 nautical miles from Polauan Port in Dapitan at around 11 p.m. on Tuesday.

The cause of the fire is not known yet. Engineer Fernando Inting, chief operations officer of Lite Holdings Inc., said the National Bureau of Investigation wants to help in the investigation to determine if there were explosives, firearms or ammunition loaded in the vessel.

“There were instances before when there were firearms and ammunition confiscated (by our security). We are not discounting that possibility,” said Jonathan Imboy, vice president for operations of Lite Holdings Inc.

Lt. Junior Grade Michael John Encina, PCG-Central Visayas spokesman, said a Board of Marine Inquiry composed of the PCG Dapitan and the Maritime Industry Authority will be formed to investigate the incident.

He said that mv Lite Ferry 16 underwent proper inspection before leaving the port and there were no hazardous or flammable materials found in the vessel.

The vessel also had all the necessary safety certificates required by Marina.

He and other passengers were rescued three to four hours later by a passing FastCat fastcraft, but not before they jumped into the sea as fire had engulfed more than half of the ferry.

No Coast Guard in sight

When Castro posted his video on Facebook about 7 a.m. Tuesday, the ferry was still on fire.

He said no PCG personnel came to their rescue.

Castro’s account about the absence of the Coast Guard was corroborated by Allan Barredo, a passenger of the FastCat that rescued some of the passengers.

Barredo, in his online post, said they spotted the burning roro vessel before 2 a.m. Wednesday.

The FastCat left Dapitan for Dumaguete City in Negros Oriental at 12:15 a.m. Wednesday.

About 40 minutes into their voyage, the fastcraft’s crew received a distress call from the Lite Ferries vessel, Barredo said in an online interview.

He said they were able to rescue 40 or 50 passengers, including children and senior citizens.

“Infant was okay but was very cold. My wife held the infant for several minutes and we gave our extra jackets and malong and towels. Weather was a bit chilly,” he said.

Most of the passengers that FastCat rescued had jumped into the water because the blaze had spread. Castro, in his video, noted that they were all wet because they had jumped from the burning ferry.

Some people were also huddled together at the vehicle ramp of the roro vessel, waiting to be rescued.

“(FastCat) Captain maneuvered our boat close to the burning ship several times. Ropes were used as well as one rubber boat (in the rescue)... We did not leave the burning ship until all were rescued,” Barredo said.

After three hours, he said there were still no Coast Guard boats in sight.

Encina denied that the PCG did not immediately respond.

“It’s impossible that there was no PCG during the response. We were informed by the PCG Dapitan that around 12 midnight they were already responding. Maybe it just so happened that the PCG vessel was still in Cagayan de Oro, but there were Coast Guard personnel on the ground working on the response. We also tapped other shipping vessels for help,” he said.

Inting of Light Holdings Inc. said they already instructed their Dipolog Branch to give each passenger who would want to come home P10,000 in cash assistance.

“As for the families of the casualties, we still have to discuss that with management. Definitely, we have insurance,” he said.

On Sept. 2, 2018, Lite Shipping Corp.’s mv Lite Ferry 28 also caught fire in the seawaters off Barangay Taloot in Argao, Cebu. No one was injured.