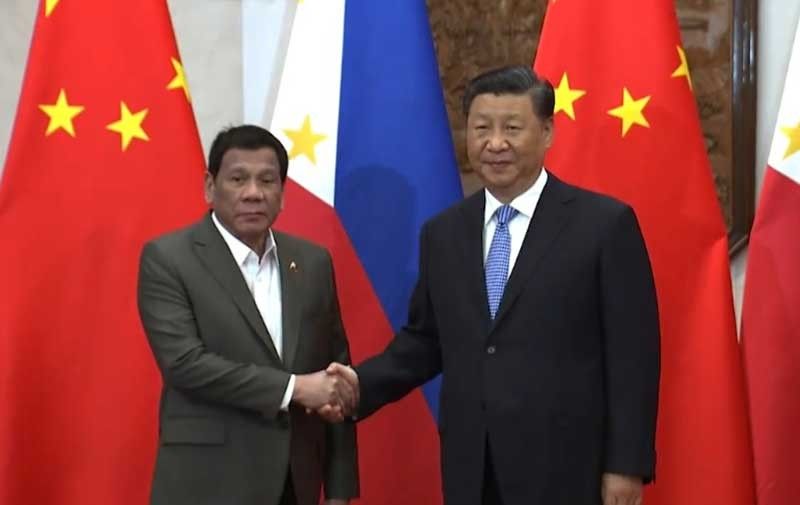 MALACAÑANG has confirmed that President Rodrigo Duterte made it clear with Chinese President Xi Jinping that the Philippines’ arbitral win on the South China Sea conflict is "final, binding, and not subject to appeal.”

Xi, in response, refused to budge and reiterated his government’s position of not recognizing the arbitral ruling.

Duterte had made good his declaration that the time has come for him to raise the arbitral ruling with Xi, after more than three years of soft-pedaling on the issue.

Under the planned joint exploration deal, the Philippines will get 60 percent of the oil and natural gas reserves while China will take the remaining 40 percent.

In a statement, Presidential Spokesperson Salvador Panelo said Duterte was confident that his invocation of the arbitral ruling on the disputed waters would not sour Manila's improved ties with Beijing.

"Both President Duterte and President Xi agreed that while their variant positions will have to remain, their differences however need not derail nor diminish the amity between the two countries. They shared the view that the contentious issue is not the sum total of the Philippines-Chinese bilateral relationship," Panelo said.

"They likewise are on the same page on the belief that the foundation and future of their countries’ friendship cannot be anchored to their respective positions on the subject, and that the basis of their ties is their centuries old friendship as well as the benefits that will redound to their peoples by virtue of their cooperation," he added.

Panelo noted that both leaders agreed "to work together, on the basis of mutual trust and good faith, to manage the South China Sea issue, and to continue to dialogue peacefully in resolving the conflict."

"President Duterte and President Xi agreed on the importance of self-restraint and respect for freedom of navigation in - and overflight above - the South China Sea," he said.

Duterte finally brought up the Philippines arbitral win during his eighth bilateral meeting with Xi at the Diaoyutai State Guesthouse in Beijing on Thursday.

On July 12, 2016, the Permanent Court of Arbitration in The Hague, Netherlands ruled in favor of the Philippines' petition that China's "nine-dash line" claim covering almost the entire South China Sea was invalid.

Duterte, who sees China as the Philippines' friend for funding his administration's ambitious infrastructure program, has been lenient with Beijing's unabated military build-up on its man-made islands in the busy waterway.

In his previous speeches, the President had persistently said that he could not assert Manila's landmark win against China's expansive claims to the South China Sea as it would only lead to war and the Philippines' defeat.

Seemingly unfazed by Beijing's firm stance that it would not acknowledge the sea ruling, Duterte told Xi Thursday that China should respect the Philippines' historic win before the arbitral court with regard to the territorial disputes, Panelo said.

Panelo said Duterte likewise took the occasion to talk with Xi about the crafting of a Code of Conduct (COC) in the South China Sea.

Negotiations between the Association of Southeast Asian Nations (Asean) and China are still underway for the crafting of a final and binding COC in the South China Sea aimed at promoting peace and stability in the contested waters.

Brunei, Malaysia, the Philippines and Vietnam are the four Asean member-states that are claiming parts of the South China Sea, while China and Taiwan are claiming most of the busy waterway.

"With the Philippines as the designated country coordinator of the Asean-China Dialogue Relations, the Filipino head of state articulated his firm belief that the Code of Conduct would contribute in the resolution of numerous conflicts in the disputed areas of the South China Sea," Panelo said.

"Chinese President Xi agreed with President Duterte that there is a need for the formulation of the Code of Conduct and it should be crafted within the last remaining years of [Duterte]," he added.

Panelo said Xi sought the creation of a steering committee that would prepare a substantive program on the completion of the sea code.

With regard to the June 9 allision of a Filipino fishing boat and a Chinese vessel at Recto Bank, Duterte acknowledged that China "has recognised and confirmed the responsibility of the Chinese fishing crew," his spokesman said.

Panelo stressed that Duterte also expressed appreciation for China’s readiness to provide compensation to the 22 Filipino fishermen who almost lost their lives when their boat sank after the ramming incident.