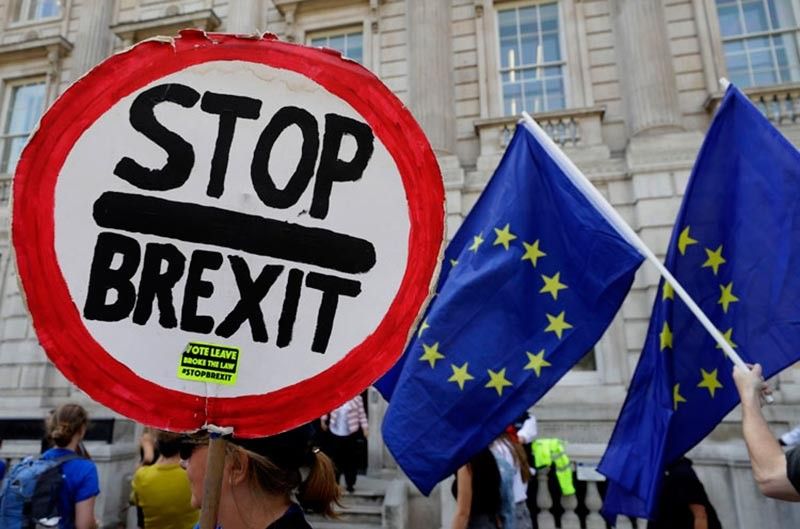 LONDON. Anti-Brexit demonstrators wave banners and flags outside the Cabinet Office in London, Friday, August 30, 2019. A legal challenge aimed at stopping Boris Johnson's suspension of Parliament has been denied an interim interdict at the Court of Session in Edinburgh on Friday. A cross-party group of MPs and peers filed a petition at Scotland's highest civil court earlier this summer aiming to stop the Prime Minister being able to prorogue Parliament. (AP)

LONDON -- British Prime Minister Boris Johnson's decision to suspend Parliament for part of the run-up to the October 31 Brexit deadline faces mounting legal and political challenges ahead of a weekend of planned street protests.

There are three ongoing court tests to Johnson's plan, which he said is routine but which will shorten the time in which opponents in Parliament could seek to pass legislation blocking a disorderly "no deal" departure from the European Union.

A Scottish judge Friday declined to issue an immediate injunction to block the suspension of Parliament but set up a full hearing Tuesday, September 3, on the legal bid launched by cross-party legislators determined to keep Parliament in session.

A separate case in London has also received the heavyweight backing of former Prime Minister John Major — a fellow Conservative from Johnson's party — and from Tom Watson, the deputy leader of the opposition Labour Party.

Major hopes to formally join the case started by activist Gina Miller so he can argue that Johnson has exceeded his authority by asking Queen Elizabeth II to shutter Parliament for several weeks during the crucial period before the Brexit deadline.

"If granted permission to intervene, I intend to seek to assist the court from the perspective of having served in government as a minister and prime minister, and also in Parliament for many years as a member of the House of Commons," he said.

A case is being heard in Northern Ireland, as well.

The various courts are being asked to intervene in what is seen by Johnson's opponents as a power grab that undercuts the sovereignty of Parliament.

It is too early to gauge the possible impact of street protests planned for Saturday in London and other major British cities. Activists hope a massive turnout could influence vacillating members of Parliament when it reconvenes on Tuesday after a summer recess.

Organizers said more than 30 protests have been planned in cities throughout the United Kingdom.

Opponents of a possible "no deal" Brexit will have to hustle to craft a bill in the constrained time period. Success may depend on whether a significant number of legislators from Johnson's Conservative Party are willing to join forces with Labour and other parties to frustrate the prime minister's oft-stated goal of taking Britain out of the EU on October 31 regardless of whether a deal is in place.

Shami Chakrabarti, a senior adviser to the Labour Party on justice issues, told BBC radio that she is hopeful there is enough opposition in Parliament to block Johnson from carrying out a "no deal" departure.

In Scotland, Judge Raymond Doherty turned down a bid for an immediate intervention but said a "substantive" hearing Tuesday would allow the case to be heard in a timely fashion. He did agree to move the full hearing from September 6 to Tuesday to speed up the process.

"It's in the interest of justice that it proceeds sooner rather than later," he said.

The case was brought by a cross-party group of roughly 70 legislators seeking to broaden the period for parliamentary debate in a bid to prevent a disorderly departure by Britain from the European Union.

The legislators backing the legal bid want Johnson to submit a sworn affidavit explaining his reasons for suspending Parliament. It is not clear if such a statement will be required.

The defiant prime minister warned Friday, August 30, that opposition to his plans is weakening Britain's negotiating position by giving EU leaders the impression that Parliament may step in to block Brexit.

"I'm afraid that the more our friends and partners think, at the back of their mind, that Brexit could be stopped, that the U.K. could be kept in by Parliament, the less likely they are to give us the deal that we need," Johnson told Sky News. He claimed there is still time to make a deal with the EU.

At a meeting in Helsinki, some senior EU officials expressed concern about Johnson's tactics and the rising possibility of a "no deal" Brexit.

"Westminster is the mother of all parliaments, and now you have a situation where that parliament is in danger of being sidelined," Luxembourg Foreign Minister Jean Asselborn said.

He believes "no deal" would inflict needless pain.

"I'm worried," he said. "A no deal is a catastrophe. It could cost thousands and thousands of jobs and needlessly create misery. I hope that political reason will prevail." (AP)