Roro vessel falls on its side while unloading cargo 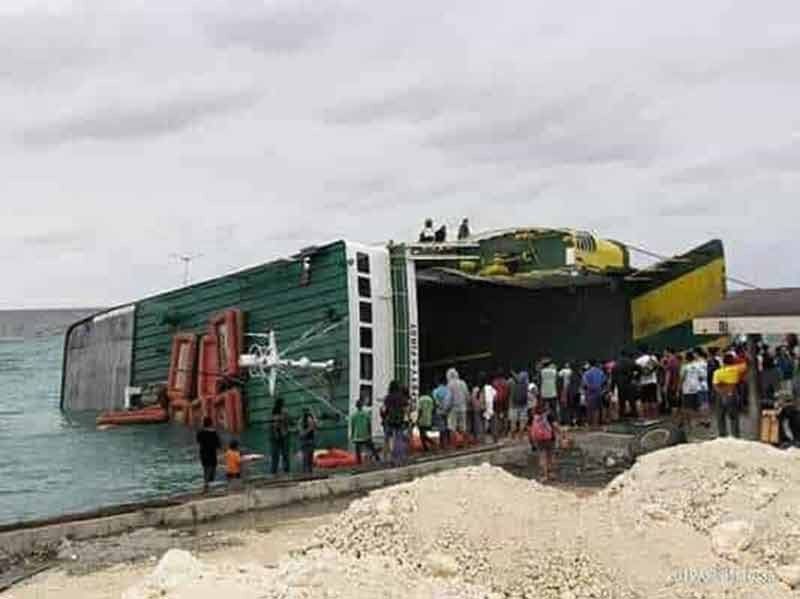 MV Mika Mari 8, a roro vessel of Jomalia Shipping Corp., falls on its side while unloading cargo at the pier in Barangay Consuelo, Camotes Island on Saturday afternoon, Aug. 31, 2019. (Contributed Photo / Coast Guard)

A RORO (roll-on, roll-off) vessel that was docked in the port of Barangay Consuelo, San Francisco, Camotes Island tilted on its side while it was unloading cargo and passengers on Saturday afternoon, Aug. 31, 2019.

Four passengers were brought to a nearby hospital after they were hurt during the accident. The other 149 passengers and 18 crew members of mv Mika Mari 8 were safe.

Although the sea condition was calm, the vessel reportedly fell on its side after losing its balance while unloading its cargo.

Encina said their detachment in San Francisco immediately sent its Quick Response Team to the scene.

The PCG 7 based in Cebu City also deployed its team to Camotes Island to assist the local detachment.

Encina said Roger Capin, the vessel’s skipper, will be required to submit a marine protest within 24 hours.

Encina also said Jomalia Shipping will be required to compensate the owners of the four vehicles that fell into the water.

Jollibee Heducos told Superbalita Cebu that she and other passengers bound for Danao City were waiting to board the vessel while it was unloading its cargo when the incident happened.

Heducos said she and her fellow passengers were given ticket refunds. (FROM HBL OF SUPERBALITA CEBU / JKV)