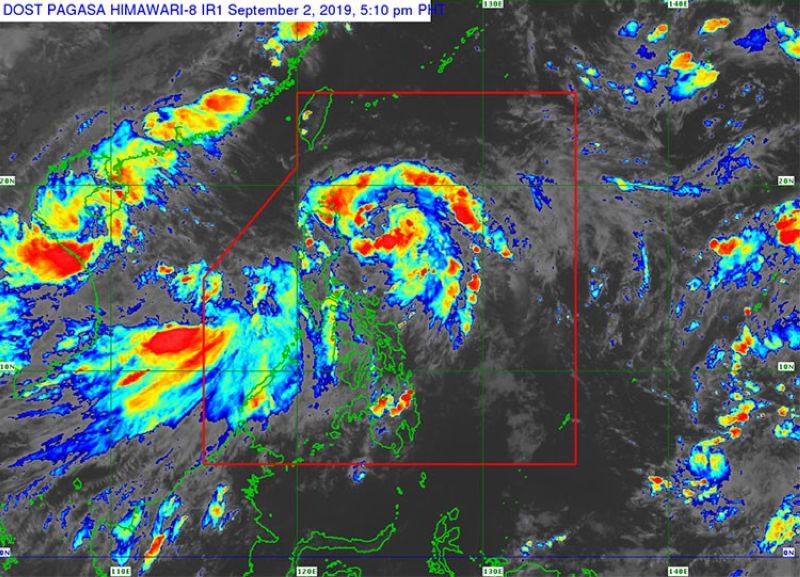 TROPICAL Cyclone Wind Signal (TCWS) Number 1 has been raised over the province of Batanes as Tropical Storm Liwayway (Lingling) slightly accelerated Monday, September 2, while moving north-northwestward over the Philippine Sea.

Liwayway, however, remains less likely to make landfall in the country but might intensify into a severe tropical storm within 48 hours, said the Philippine Atmospheric, Geophysical and Astronomical Services Administration (Pagasa).

Aside from Liwayway, a low pressure area (LPA) was spotted west of Central Luzon and it might develop into a tropical depression, said Pagasa.

As of 4 p.m. Monday, the LPA was located at 500 kilometers west of Iba, Zambales.

Liwayway, meanwhile, was located at 320 kilometers east northeast of Casiguran, Aurora as of 4 p.m. Monday. It was packing maximum winds of up to 65 kilometers per hour (km/h) near the center and gusts of up to 80 km/h. It was moving north northwest at 30 km/h.

The weather bureau said Liwayway is forecast to exit the Philippine area of responsibility either on Wednesday (September 4) or Thursday (September 5).

Between today (September 2) and tomorrow afternoon (September 3), Liwayway will bring light to moderate with intermittent heavy rains over Cagayan including Babuyan Islands and Batanes, said Pagasa.

Between tomorrow afternoon (September 3) and Wednesday afternoon (September 4), Liwayway may bring light to moderate with intermittent heavy rains over Batanes and Babuyan Islands, while scattered light to moderate with at times heavy rain showers due to the Southwest Monsoon may affect Ilocos Region, Cordillera Administrative Region and Central Luzon, the weather bureau added in its 5 p.m. advisory.

Pagasa advised residents of the aforementioned areas, especially those living in areas identified to be highly or very highly susceptible to floods and rain-induced landslides, to take precautionary measures, coordinate with local disaster risk reduction and management offices, and continue monitoring for updates.

It said sea travel is risky over the seaboards of Luzon, including those under TCWS Number 1 due to potentially rough sea conditions. (LMY/SunStar Philippines)