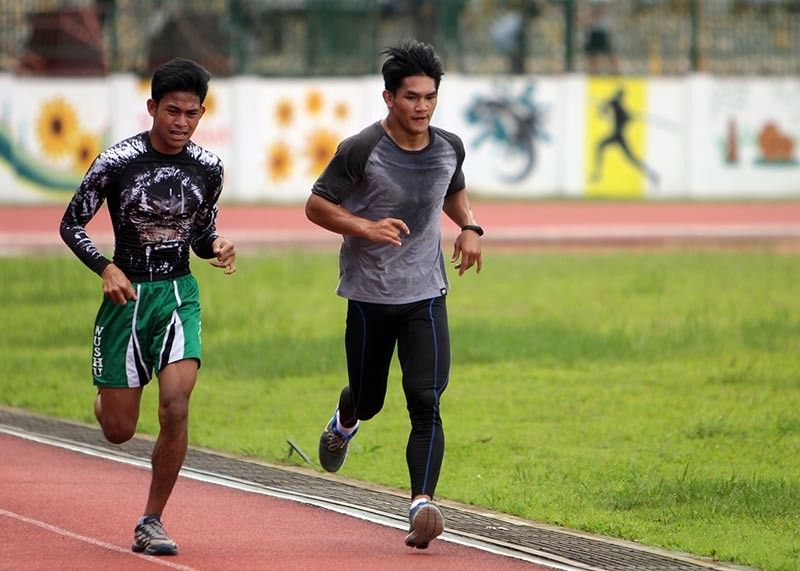 BAGUIO. Danny Kingad holds an early morning jog at the Baguio Athletic Bowl as he gears up for a titanic showdown against Demetrious Johnson in the ONE Flyweight World Grand Prix Championship Final on October 13 in Tokyo, Japan dubbed ONE: Century. (Roderick Osis)

But the Team Lakay flyweight contender is optimistic Mt. Everest can be conquered and so is Johnson, considered as mixed martial arts pound for pound king.

Kingad and Johnson meet in the ONE Flyweight World Grand Prix Championship Final on October 13 in Tokyo, Japan dubbed ONE: Century.

one of the best and he is more experienced," said Kingad.

Kingad, more than improving his over-all game, is also toughening his mindset against Johnson, who successfully defended the flyweight belt 11 times in UFC before joining ONE.

The Team Lakay fighter has earlier said he wanted this opportunity, and cannot wait to show that athletes from the East are a match for the best of their Western counterparts.

"It is a good thing DJ won. I'm happy he won because I really wanted to face him -- I want to be the person to beat him," he said. "They say he's the greatest of all time, but I guess we're proving that Asians - particularly the small guys - are world-class as well."

Although Kingad is confident about his chances against "Mighty Mouse," he knows he cannot afford to leave a single stone unturned in his preparation to face him.

After his win against Reece Mclaren in August, Kingad immediately started training camp with his Team Lakay brothers as he hopes to cash in on the momentum of his victory in Manila.

Kingad was the shining light for the country at ONE: Dawn of Heroes at Manila's Mall Of Asia Arena, where four of his teammates were defeated.

"I've never imagined I would be in this position. I didn't know if I was built for this [when I first started in mixed martial arts], but we're here now, and I'm blessed to be given the opportunity to chase that dream."

Two more Team Lakay will see action in the stacked ONE Championship card in Japan.

Lito Adiwang, who was recently signed up after an impressive showing in ONE Warrior Series, will debut against Senzo Ikeda in a strawweight contest while Honorio Banario seeks redemption against former world champion Shinya Aoki in a lightweight clash.

Honorio Banario, the inaugural ONE featherweight world champion, meanwhile, gets a shot at redemption as he takes on former lightweight champion Shinya Aoki.

Aoki earlier defeated Folayang in ONE's initial event in Japan in March with a first round submission to reclaim the belt. The Japanese fighter however would yield the belt to Christian Lee in the second round.

Banario meanwhile hopes to get back to the winning track after back to back defeats against Lowen Tynanes and Dae Sung Park.