Bzzzzz: Attackers were sloppy or Dela Cerna was just lucky 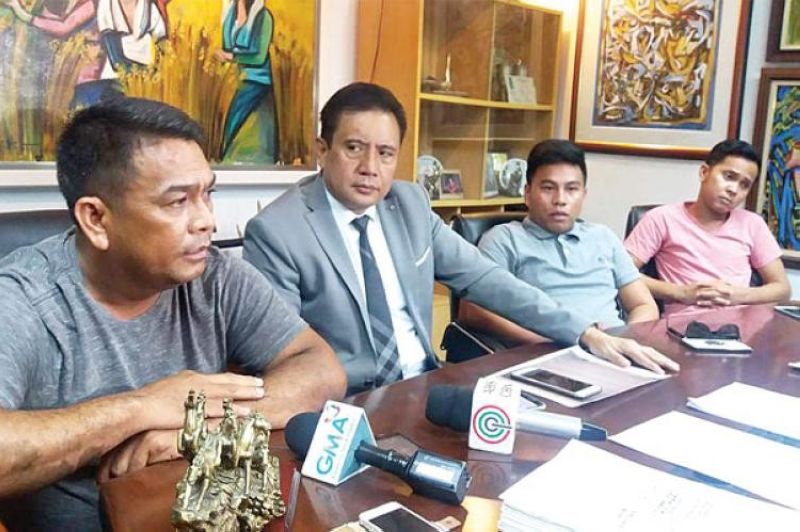 CEBU. Atty. Inocencio Dela Cerna (center) with Lobo Boniel (left), one of his clients in the Boniel case. (SunStar File)

Next step to watch is how the Comelec will execute the order. It's not likely to order the transfer of Sherwin's votes to Amay; the ballots have to be reviewed to see which of them have votes for both Abellas, in which case only one in such ballot will be added to Amay's pile. A protest may have to be filed by Amay, using the nuisance ruling against Sherwin.

If it were not a multiple-position case, Amay would've already evicted #8 Councilor Philipp Zafra.

* IS CEBU CITY SAFE UNDER THIS TEST? EIU, quoting Alioune Badiane, president of The Urban Think Tank Africa, says, "In any city where you can often see a woman walking alone at night, you bet that it is a safe city." "Although a seemingly simple metric, walking alone at night indicates safety from violent attack."

How would Cebu City, or any of our cities, fare under such a test?

Did having a gun help?

Obviously, it helped Atty. Inocencio Dela Cerna when he was fired at by armed men as he was driving his car Monday (September 2) out of the Cebu City Hall of Justice at Qimonda IT Center along Serging Osmena St. at Cebu north reclamation area. He was shot at multiple times but he managed to drive to the Waterfront police station and survive the assault.

He told Junnex Napallacan of dyLA radio, outside the police station, that he had fired back over his shoulder but didn't hit any of his attackers. That was when the armed men fled.

While having a gun and knowing how to use it expertly helps, the odds are usually against the victim as he does not know when his assailants will strike. The element of surprise and superiority in number and firepower favor the killers.

Every time, assassins fail, as they did with Dela Cerna, that is blamed on:

[1] Sloppy work of the killers and better skill of the target, which the movies usually depict for the hero in the film; or

The problem with a failed mission is that the killers are likely to try again unless they are caught and their mastermind exposed and prosecuted.

Those who were attacked and survived would usually lead sheltered, closely guarded, or hermit-like lives afterwards -- unless their assailants are swiftly caught and prosecuted.

Atty. Dela Cerna was or has been in so many high-profile cases that police investigators would've a surfeit of theories to pick. Which is not good because the real motive could lurk behind one of the many theories.

They include, not in any particular order:

[1] He is defense lawyer of Bohol Provincial Board Member Niño Rey Boniel in the kidnapping and serious illegal detention of Gisela Boniel, Niño Rey's missing wife and former mayor of Bien Unido, Bohol.

[2] He lawyered for Medellin, Cebu councilor Ricardo Ramirez who himself was executed by dozens of armed me while he was detained at the Bogo-Medellin Medical Center.

Dela Cerna filed the petition before the Bogo RTC allowing medical examination of Ramirez in Cebu City and staying as patient in the Bogo-Medellin hospital.

[3] He was also lawyer for CIDG, which required him to handle sensitive cases. In November 2006, one Robert Browning, an American national, and his two bodyguards allegedly destroyed properties in Dela Cerna's office at CIDG.

[4] He served as lawyer for the members of the Toledo City Council who filed in May 2018 10 charges against then acting city mayor Antonio Yapha Jr. and the city legal officer before the ombudsman. He was then providing legal services to suspended mayor Sonny Osmeña.

[5] He helped prosecute for DILG Bella Ruby Santos and her British boyfriend in the Ella Joy Pique kidnapping-murder case in August 2012. They lost and Santos walked while her b.f. had fled the country to avoid trial.