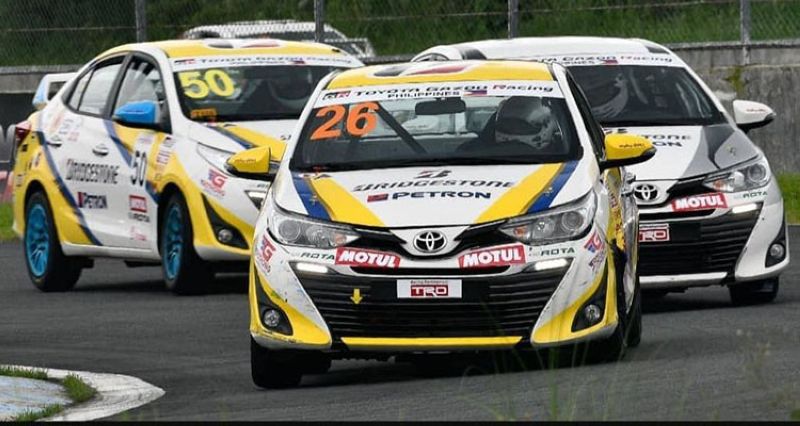 TOYOTA Team Cebu continued to prove itself as Cebuano drivers Julian Neri and Clive Fermin took home podium finishes in their respective divisions in the August leg of the Vios Racing Festival on Sunday, Sept. 1, 2019 at the Clark International Speedway in Pampanga.

The 18-year old Neri finished second in races four and five in the Promotional Class while Fermin nabbed third place honors in races five and six in the Sporting Class.

The team’s other driver, veteran Lord Seno, had his three-year run of podium finishes snapped as he spun out, hit the wall and broke his right wheel, giving him a Did Not Finish (DNF) in the final race.

Neri was in great position to potentially grab a podium finish in the leg’s final race but unfortunately, got disqualified after his car was found to be underweight.

“The weekend didn’t start well, then it became good and ended bad,” was Neri’s blunt assessment of the weekend’s developments.

After qualifying in third place, Neri relayed that he leaned on a quick start to get the jump on his rivals.

“I had a good start on all three races and it really got me up there to compete with the top dogs,” said the son of veteran karter, Justin Neri.

Meanwhile, Fermin, who was making his Sporting Class debut after winning the Promotional Class last year, started the leg by finishing in fifth during the qualifying time trials, before eventually asserting himself and landing in third place in the leg’s last two races.

Nevertheless, Fermin believes he can still do a whole lot better after missing the first leg in June and missing out on some crucial seat time in the Vios One Make Race (OMR) car.

“Having missed the first leg, it dawned on me that I had very little seat time in the new car,” said Fermin. “The others already had one race under their belts plus the associated practice sessions that came with it.”

Fermin also admitted that he needed to do better getting off the line at the race’s start.

“In races five and six, I had really embarrassing starts. Both times, I rocketed from somewhere near the front to the midpack. I still need to practice getting off the line. I’m lucky that both times, the race came to me and I took some places back, eventually finishing the race both times in third place.”

Seno, on the other hand, regretted getting too careless while driving in the rain.

“Very difficult weekend for me. Spent the two races shedding the success ballasts. It was game in race six but got too careless in the rain. In the team awards, I think we are in fourth. My DNF took a toll and it’s a shame really, as Julian and Clive were doing really well,” said Seno. (JNP)