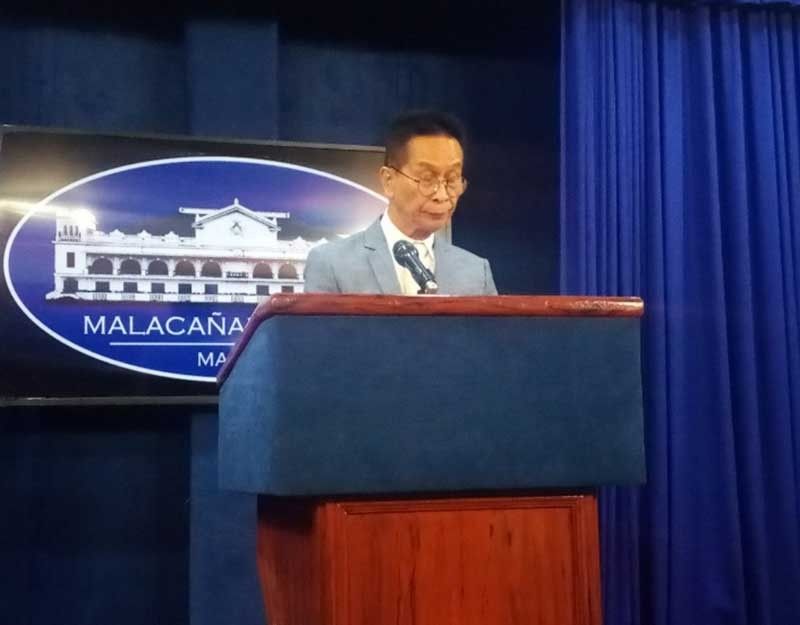 PRESIDENTIAL Spokesperson Salvador Panelo on Tuesday, September 3, said it was part of the standard operating procedure (SOP) of his office to endorse to appropriate government agencies the application of former Calauan, Laguna mayor Antonio Sanchez for executive clemency.

Panelo, who is concurrently the Chief Presidential Legal Counsel, said the letter sent by Sanchez's daughter Marie Antonelvie Sanchez was just one of the "thousands" of requests that his office received.

He said it has been the SOP of the Office of the Chief Presidential Legal Counsel to respond to all letters and refer these to the appropriate department or agency, which has the authority to act on the writer's concern.

"Every day, we receive letters coming from all walks of life. Some of them are request for finances, for hospitalization, so many others from the inmates asking for clemency, asking for pardon, asking for commutation. All of them, we respond because the policy of the President is to respond to all letters addressed to the Office of the President," he added.

In a letter dated February 19, Panelo referred to Board of Pardons and Parole (BPP) Executive Director Reynaldo Bayang the application of Sanchez for executive clemency. The letter surfaced in a Senate hearing Tuesday on the controversial good conduct time allowance (GCTA) system.

"In line with the President's commitment for good governance and immediate action on matters that affect the welfare of the people, we are referring this matter to your good office for your evaluation and whatever appropriate action you may want to undertake under the premises," Panelo wrote.

"We request that your good office update us for record purposes and for whatever action this office may want to undertake consistent with law and the policy of the President for good government," Panelo added.

During his press conference Tuesday, Panelo said his letter should not be viewed as "intervention or recommendation."

He had served as one of Sanchez's legal counsels in the 1993 trial on the rape-slay of Mary Eileen Sarmenta and the killing of Allan Gomez, both students of University of the Philippines Los Baños.

Sanchez was convicted of the crimes and sentenced to seven life terms.

"There’s nothing personal in communicating with them. It’s all official... Mine is official. It’s an official communication written to this office, and we responded by referring the same," he said.

"You know, this office, as I said, receives and responds to all letters. We cannot discriminate. Otherwise we will be accused of being partial and discriminatory. Kailangan lahat sasagutin mo (You have to respond to all letters)," he added.

Panelo also divulged that in response to his letter, the BPP on March 19 "denied" Sanchez's bid, citing the "gravity of offenses" the convict has committed as the reason.

The GCTA sparked outrage following reports that Sanchez would be among around 11,000 prisoners who may be granted early release for good behavior.

Panelo has repeatedly denied a hand in the possible early release of his former client.

Meanwhile, Panelo announced his plan to file a libel complaint against two online media outlets, Rappler and Inquirer.net, for their allegedly "malicious" articles about his referral letter.

Panelo revealed this in another interview with Palace reporters.

"We find it unfortunate that this representation, referral letter to Board of Pardons and Parole executive director Reynaldo Bayang dated February 16, 2019, is unwittingly and erroneously and even maliciously being reported as a recommendation letter for the executive clemency for former Calauan mayor Antonio Sanchez," he said.

"This report is far from the truth and we find it defamatory in nature," the Palace official added. (SunStar Philippines)