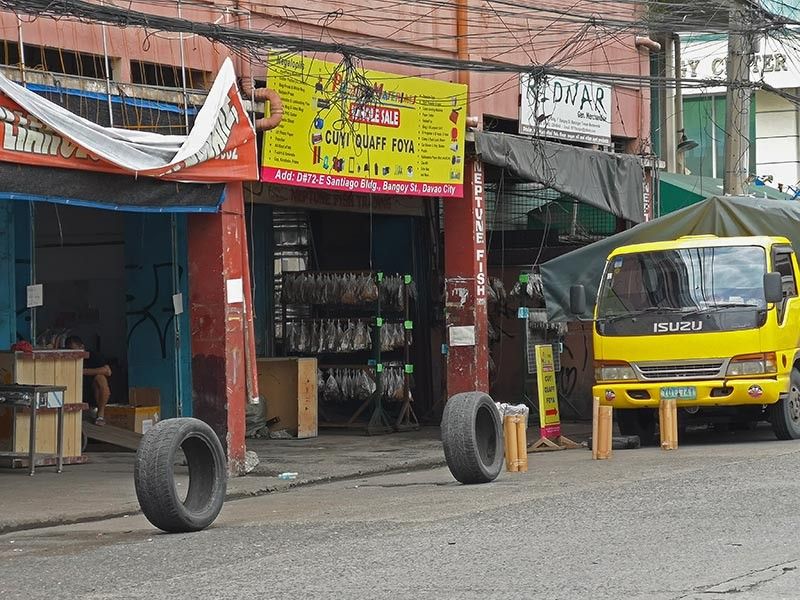 DAVAO. Tires and other items are placed by several business establishments in the road to prevent other vehicles from parking in front of their establishments, making the road exclusive for them. (SunStar Davao)

MORE than 100 establishments obstructing the sidewalks will be given until the end of September to clear their premises of illegal structures, according to the City Transport and Traffic Management Office (CTTMO).

CTTMO chief Dionisio Abude said they will be sending a summon letter to the establishments, vulcanizing shops, and junkshops within this week to inform them to clear out illegal obstructions or their unit will personally remove it.

Prior to the order of the Department of the Interior and Local Government (DILG) to clear public roads of illegal structures by the end September, Abude said CTTMO had been conducting the operations by personally asking the establishments to remove it.

"Prior sa mandate sa atong Presidente, naghinay-hinay nami og panguha og pictures nga himuon namong ebidensya, in case nga mag conduct og demolish (Prior to the mandate of President, we have been conducting surveillance pictures of erring establishments, which we will use as evidence just in case we will demolish these illegal structures)," Abude told SunStar Davao Tuesday, September 3.

Abude said violators who will ignore the summon will not only have their illegal structures and items removed, but they will also submit a recommendation to the Business Bureau Office to have their renewal application blocked.

He said the CTTMO will file an obstruction case against non-compliant establishments.

He said establishments with structures or items obstructing the sidewalks are within downtown like along Quezon Boulevard, Roxas Avenue, Jacinto St, and A. Pichon St. (Magallanes).

He also said they have already conducted a dialogue with the vendor and stall owners at the Bankerohan Market, which is highly congested especially during day time.

"Ang problema man gud nato sa Bankerohan kay bagsakan area man gud ni siya, hilabi na sa buntag. Usahay sab pati pedestrian lane gi-okupar na nila (The problem of Bankerohan Market is that it is a drop-off point of all items especially in the morning. Sometimes, the over congestion of the area leads to having the pedestrian lane occupied by the vendors)," Abude said.

He also said their action is not considered "anti-poor" as the mandate is for the welfare of the public to ease traffic congestion.

"Wala may balaod nga nagdumili manginabuhi ang tao. Pero i-make sure lang na dili madistorbo ang publiko (There is no law prohibiting them to earn a living. They just have to ensure they will not disturb the public)," Abude said.

He said the clearing operation will be in cooperation of the City Engineer's Office and the Ancillary Services Unit.