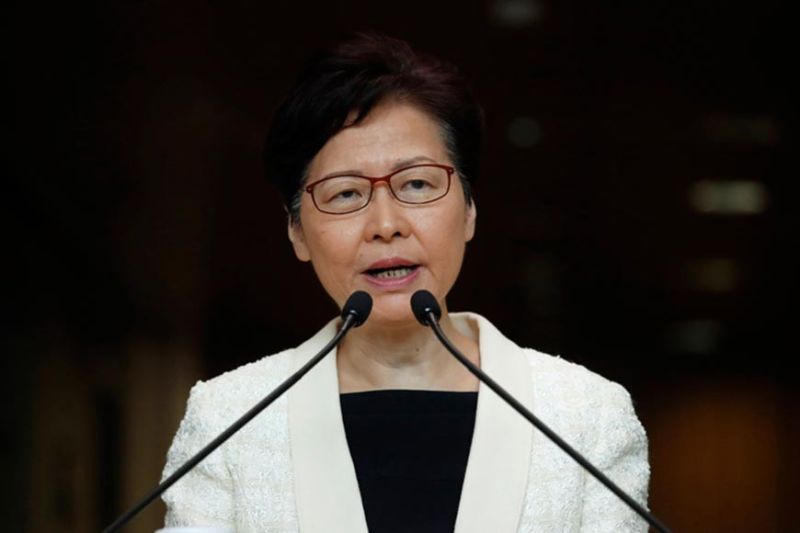 The bill allowing Hong Kong residents to be sent to mainland China for trials sparked the massive protests that have rocked the city since June. Lam has suspended the bill, but protesters want it entirely withdrawn. They also want democratic reforms to Hong Kong's government and an independent inquiry into police actions against protesers.

The office of lawmaker Michael Tien confirmed a meeting with Lam was taking place but his office didn't have details of the agenda.

Lam has no scheduled media appearance. The South China Morning Post cited an unidentified government source as saying the bill would be withdrawn before the city's legislature resumed in October.

Lam has come under withering criticism for pushing the extradition bill, which many in Hong Kong see as an example of the city's eroding autonomy since the former British colony returned to Chinese control in 1997.

Lam said Tuesday, September 3, that the "one country, two systems" formula would be upheld. She also said at the news conference she had never tendered her resignation, responding to leaked audio of her telling business leaders recently that she would quit if she had a choice.

"I have never tendered a resignation to the central people's government. I have not even contemplated to discuss a resignation...the choice of not resigning was my own choice," Lam said when asked why Beijing refused to let her quit.

"I know it is not going to be an easy path, and that's why I have said that I have not given myself the choice to take an easier path and that is to leave."

Lam was elected as Hong Kong's chief executive by a pro-Beijing committee of Hong Kong elites, and the mainland government has spoken in support of her government and the city's police force throughout the protests.

Clashes between police and protesters have become increasingly violent, with demonstrators throwing gasoline bombs and rods at officers in protests last weekend. Authorities in turn have employed water cannons, tear gas, rubber bullets, and batons. More than 1,100 people have been detained.

The mostly young protesters said that a degree of violence is necessary to get the government's attention after peaceful rallies were futile. Lam's administration said the violence must end before any dialogue can begin.

In Beijing, the mainland office responsible for Hong Kong slammed the escalating violence and warned that China will "not sit idly by" if the situation worsens.

The prolonged protests have hurt Hong Kong's economy amid a slowdown in the Chinese economy and its trade war with the United States. (AP)