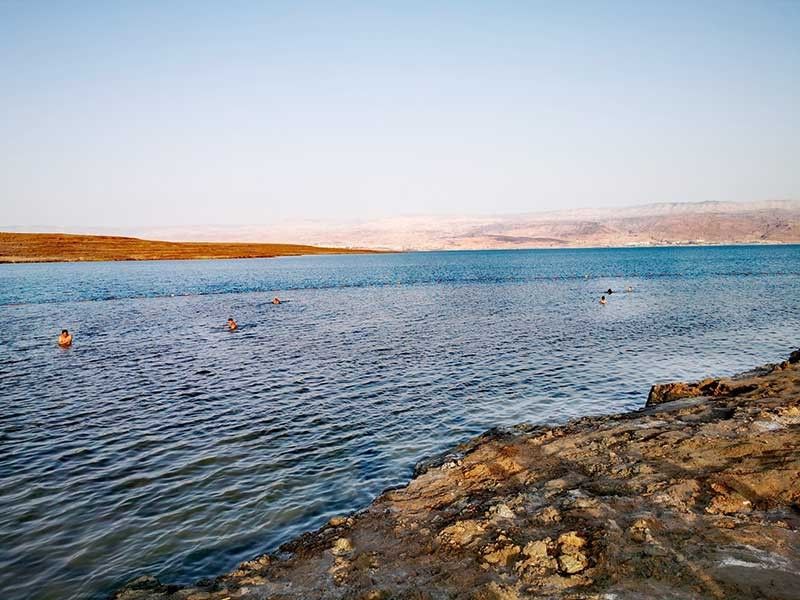 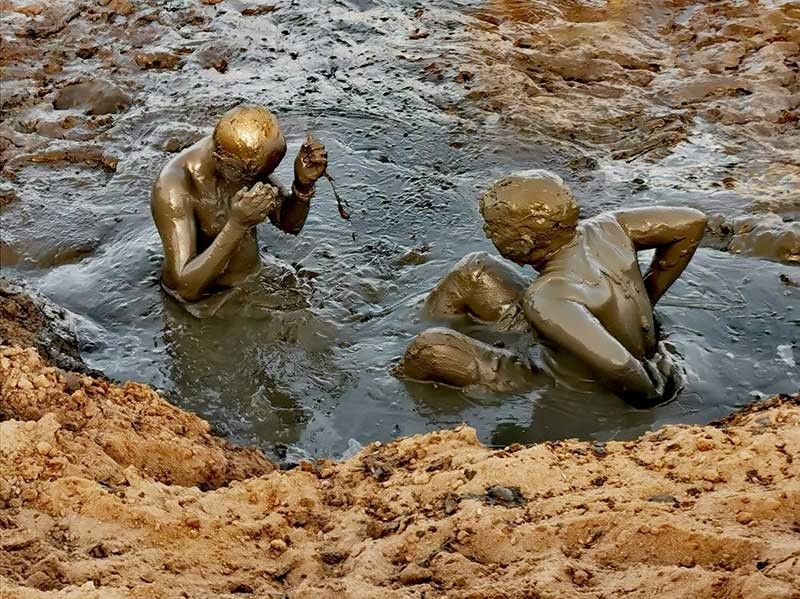 CLEAN FUN. Local boys cover themselves in a mud bath at the Dead Sea. (Photo by Grace M. Avanzado) 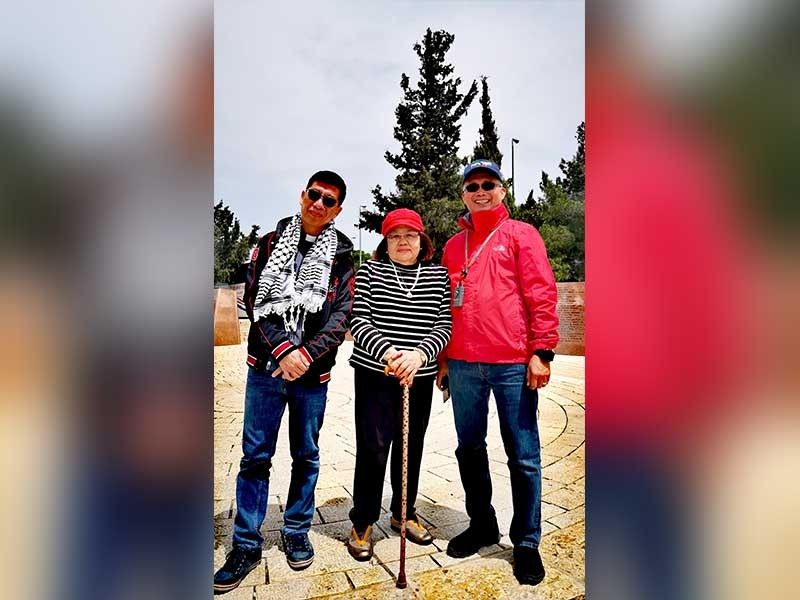 BUCKET LIST. Finally making a trip to the Holy Land the year she turned 75. Mommy flanked by her two “angels” who took really good care of her, Msgr. Joseph Tan (left) and Dr. James Guardiario. (Photo by Grace M. Avanzado) 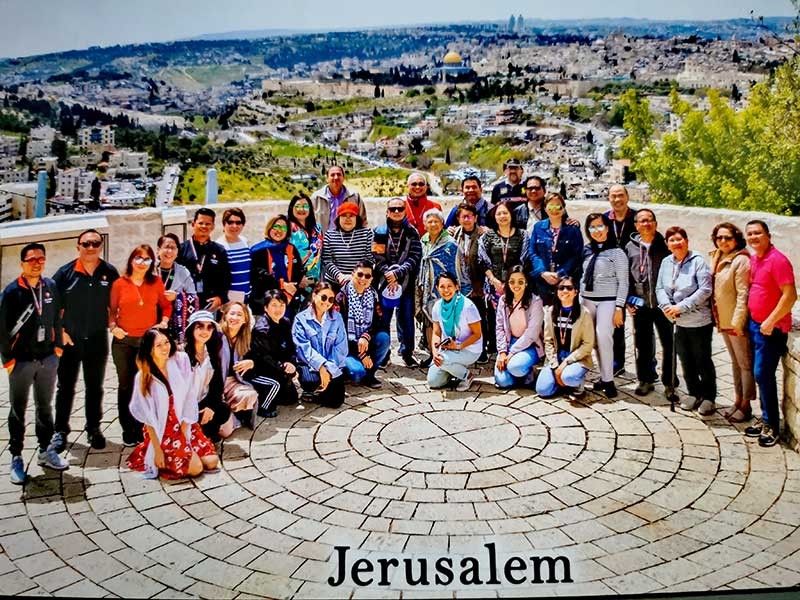 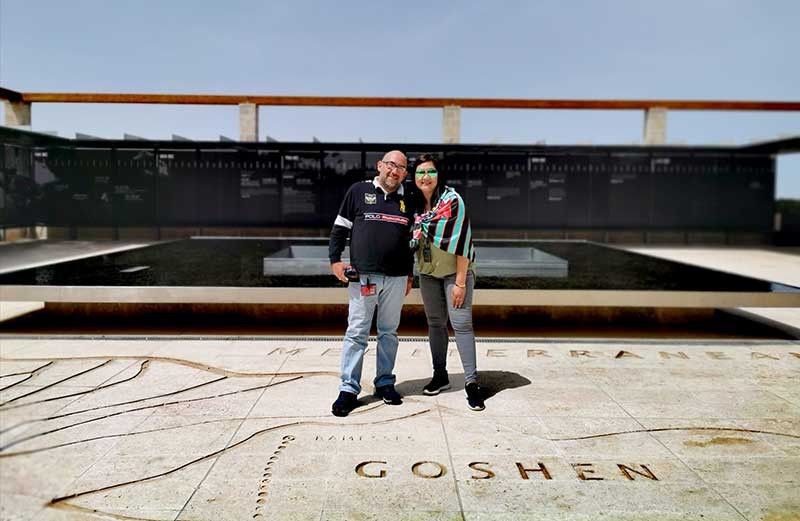 IN GOOD COMPANY. With guide Taleb in the courtyard of the Saxum Visitor Center. On the floor, the huge stone map, and surrounding us, the history of the world in wall etchings. (Photo by Grace M. Avanzado) 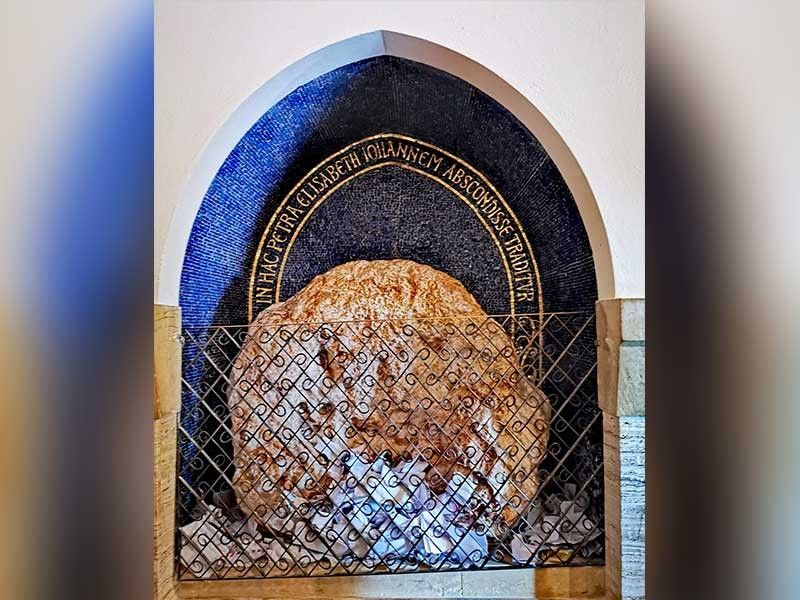 Rock that kept John the Baptist safe during the Massacre of the Innocents. (Photo by Grace M. Avanzado) 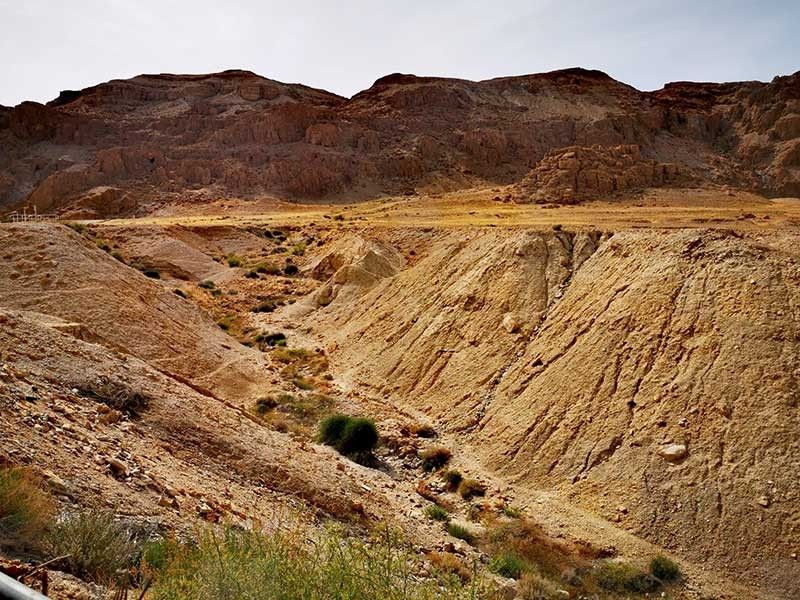 UNEXPECTED SITE. The barren landscape in Qumran where the Dead Sea scrolls were found in caves. (Photo by Grace M. Avanzado) 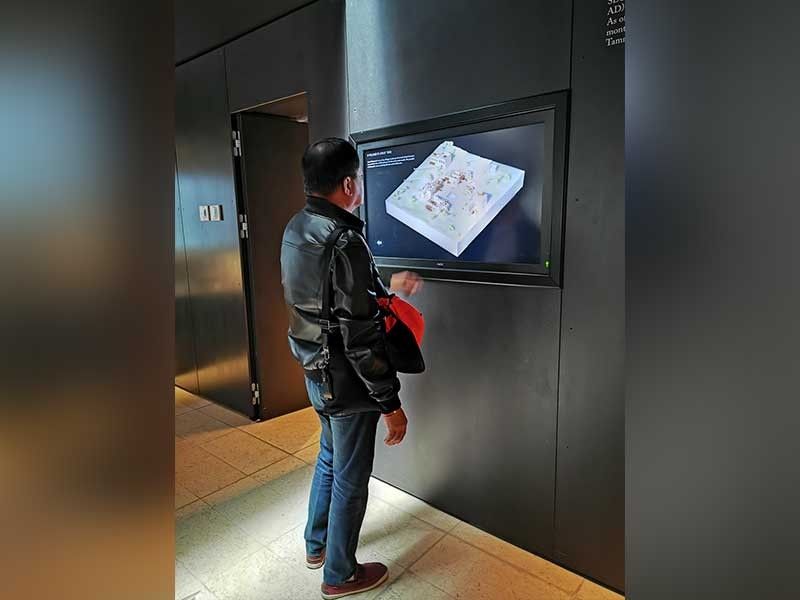 OUR last day in Israel started off with an early morning hike uphill to visit the Church of the Visitation in the picturesque village of Ein Karem.

This church commemorates Virgin Mary’s visit to her cousin Elizabeth, the mother of John the Baptist, and this scene is depicted by a mosaic in its façade. Completed in 1955 by Antonio Barluzzi, it is one of the most beautiful churches in the Holy Land. Believed to be Zechariah and Elizabeth’s summer house, a huge stone set in a niche inside the church is known as the Stone of Hiding. This stone kept baby John safe during Herod’s Massacre of the Innocents as it opened up to provide a hiding place for him.

Then we were off to the Saxum Visitor Center which opened only this year. Its inner courtyard has etchings on the wall that present a timeline that combines dates of human civilization with those of the Old Testament. It was all very interesting and a much easier way to understand the rich, and often complicated history of the Holy Land. On the ground in the same courtyard is a huge stone map which their staff used to show us the path of Abraham and Moses. Inside the center was a chapel where we had mass and saw various screens, diagrams and 4D projections of Holy Sites.

As promised, Taleb took us to Jericho to buy what he had sworn to be the best dates in the whole of Israel. Reputed to be the oldest town on Earth, it means City of Palms and is known in the Bible as the first town captured by the Israelites when they entered the Promised Land. Jesus is known to have passed through here several times as this was the usual route from Galilee to Jerusalem.

Before heading to our last stop for the day, we visited Qumran, which is famous as the Hiding Place for the Dead Sea Scrolls. A Bedouin sheep herder discovered this site by accident when he threw a rock into a cave and was met by the sound of breaking pottery. His first find was seven clay jars that were wrapped in linen for almost 2000 years. These scrolls included fragments of almost every book of the Old Testament written in Hebrew by a devout Jewish sect called the Essenes. There is no mention of any New Testament figure in any of the scrolls.

And soon, we found ourselves at the Dead Sea, preparing to take a dip into the waters of one of the most unusual bodies of water in the world. Located between Jordan and Israel, it is set in the lowest dry land point on Earth, so it has no outlet. As a result, no fish can live in it because it is extremely loaded with minerals. It is also so dense that one can lie back on its surface and not sink. Most of us took a quick dip as we were advised not to stay too long as our skin was not used to such density. The sea water getting into one’s eyes can be a very painful experience, some slipped and fell, others felt tiny scratches in their feet that throbbed - a different experience altogether, worth the effort it took to go there.