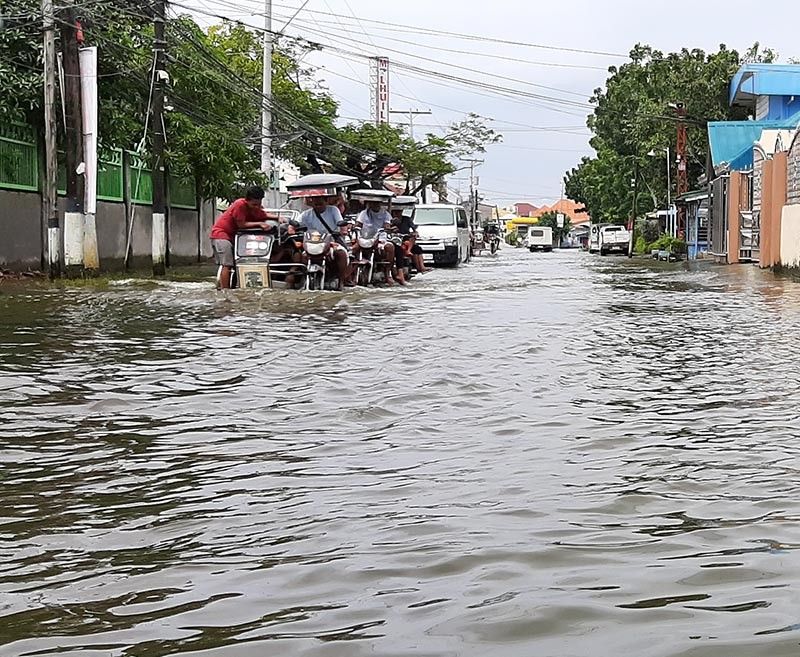 PAMPANGA. Motorists brave the almost knee-deep floodwaters in Barangay Caduang Tete, Macabebe to go to and from the town proper. (Photo by Princess Clea Arcellaz)

MORE than P5 million worth of crops have been destroyed by flooding caused by continuous monsoon rains that were enhanced by Typhoon Liwayway in the past few days.

The Provincial Disaster Risk Reduction and Management Office (PDRRMO) and Office of the Provincial Agriculturist, in a report Tuesday, September 3, 2019, said that damage to palay crops has reached P5.65 million in at least two towns.

Meanwhile, the number of flooded areas in Pampanga has increased to 33 barangays as of Wednesday afternoon, September 4. This is due to continuing rains from the prevailing monsoon and high tide.

At least 33 barangays in the province – seven in Macabebe town, 21 in Masantol and five in San Simon -- were reportedly still submerged in up to three feet of floodwaters as of Wednesday noon.

Typhoon Liwayway, which has been intensifying the effects of the monsoon, is forecast to exit the Philippine Area of Responsibility Thursday, between the afternoon and evening.

The PDRRMO disaster response personnel and all equipment remained prepositioned 24/7 while local DRRMOs are tasked to regularly monitor the situation in their respective jurisdictions and report to the provincial office. (Princess Clea Arcellaz and Ian Ocampo Flora)