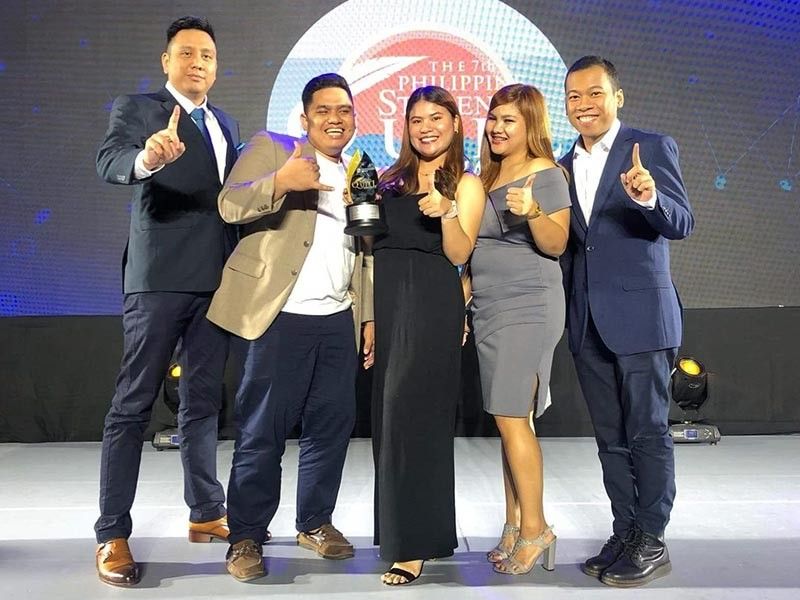 PAMPANGA. AB Communication students from Systems Plus College Foundation together with their instructors Red Tolentino and Danz Maderazo show the Philippine Student Quill Merit Award they bagged for the documentary “Jake”. (Contributed photo)

The SPCF students took home the Merit Award for the documentary entitled “Jake" about 15-year-old Jake Manansala, eldest of eight siblings, who wakes up early every morning to collect garbage around the city to make ends meet for each passing day of his family.

Angel Rupisan, one of the students who received the award, expressed hope their documentary will serve as an eye-opener to the community, especially to the government, on the real plight of indigent Filipino youth.

“We offer this award to Jake and to all the youth who were also like Jake who never stop dreaming amidst all poverty and crisis they experienced in life,” said Neil Quiambao who was the narrator of the story.

The HAU's Communicators' League, the official organization of the university’s AB Communications students, meanwhile, was cited by the award-giving body for their hosting of the event dubbed “LEVIOSA: First Central Luzon COMMvention.”

The said event held at the HAU campus is said to be the first convention that enjoined communications students all over Central Luzon to showcase and celebrate their talents and skills, said Patricia Manalo, a representative of the organization.

Another representative, Glenn Carlo Manalo, also said that award is a recognition of the talents and skills of Central Luzon students who participated in the said event.

The Philippine Quill is considered the country’s most prestigious awards program in the field of business communication. It honors exemplary communication research, programs, skills and creative work by undergoing IABC’s global standards to measure and determine the finest, the sharpest and the brightest in the business communication industry among professionals and students, respectively.