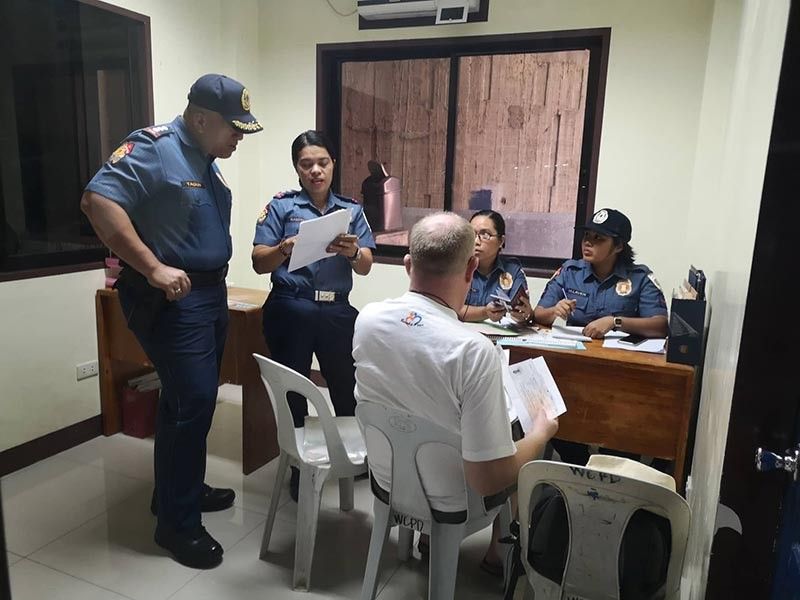 INTERROGATION. The Norwegian national during the interrogation by the personnel of the Women and Children Protection Desk of the Davao City Police Office. (Macky Lim)

THE Women and Children Protection Desk (WCPD) of the Davao City Police Office (DCPO) investigated a Norwegian national who was suspected to be involved in human trafficking.

The WCPO-DCPO conducted an operation inside a hotel at Sta. Ana Avenue in Davao City after they received information about a human trafficking case.

The Norwegian, identified as Scherner, 54, was with two minors when he entered the hotel. The WCPD learned that the children were aged eight and 10 years old.

Police Captain Nolan Tagsip, new spokesperson of DCPO, said that what they conducted yesterday was not an entrapment operation since they only invited the foreigner to clear the information they have received.

During the initial investigation, the foreigner said the eight-year-old is his Filipina wife's son out of wedlock while the 10-year-old was his wife's nephew.

The foreigner added that her wife was absent during the operation since she is in her province preparing for the documents of the eight-year-old kid.

The DCPO, however, clarified that what they have conducted was a result of the Davao City police's effort to curb human trafficking that often victimizes minors.