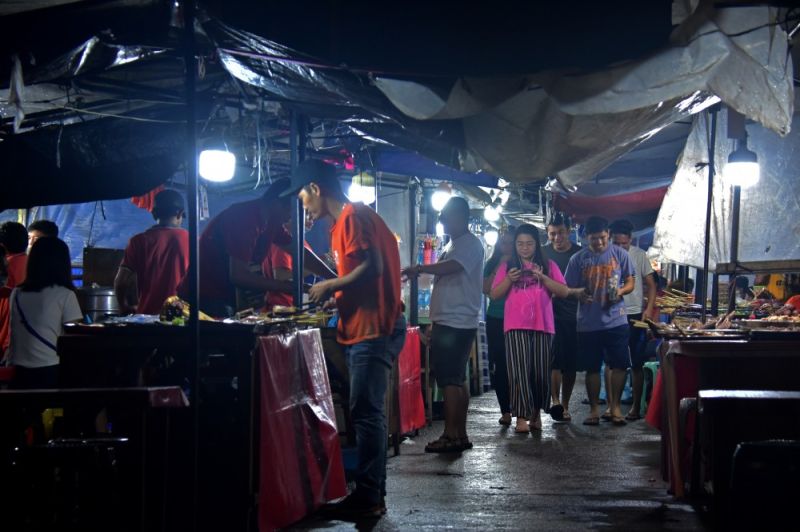 MAXIMUM SECURITY ZONE. To intensify the security at Roxas Night Market in Davao City, the security sector has proposed to declare it as a maximum security zone to further beef up the security measures around the area. (Macky Lim)

AUTHORITIES target to declare the Roxas Night Market as maximum security zone to instill a culture of security among Dabawenyos similar to the stricter security at San Pedro Square.

Speaking during the AFP-PNP press briefing yesterday, September 3, Task Force Davao (TFD) commander Colonel Consolito Yecla said that he received a message from Councilor Mabel Acosta to prepare for the declaration of Night Market as another maximum security zone.

“I believe it is the right time because, we have learned lessons in the implementation of the maximum security zone in San Pedro Square. What we did in the Task Force is to study how to do about it. For the night market and magiging sistema it is a maximum security zone which will include a human aspect of security,” Yecla said.

He acknowledged the susceptibility of the Roxas night market, which has suffered a bomb attack in 2016. Thus, they want to consider the community-based approach in securing the night market through the declaration.

“We are now coordinating with the community and the vendors, the sikad drivers, mga pushcart operators, business establishments, the security guard and workers in the night market for the conduct of anti-terror forum in the headquarters of Task Forces Davao by Friday and Saturday,” he said.

On August 6, the City Council passed a resolution declaring San Pedro Square to become a maximum security zone. It defines the maximum security zone as an area to which access is controlled through an entry point and limited to authorized, appropriately screened personnel and authorized and properly escorted visitors. It will also be monitored 24 hours a day, seven days a week by peace-keeping forces.

Among the areas covered by this zone are the City Hall of Davao, the Sangguniang Panlungsod, San Pedro Cathedral, Rizal Park, among others.

Yecla said that the role of the community in security the night market is important. He assured that though it has not been declared yet, they've been implementing stricter measures within the area with the deployment of several personnel.

“Sa Night Market gabi-gabi nagkakaroon ng activity it is surrounded by a community and meron ding business establishments na nag-operate. In securing the night market, we have to engage them while ini-implement natin ‘yong inspections,” he said.