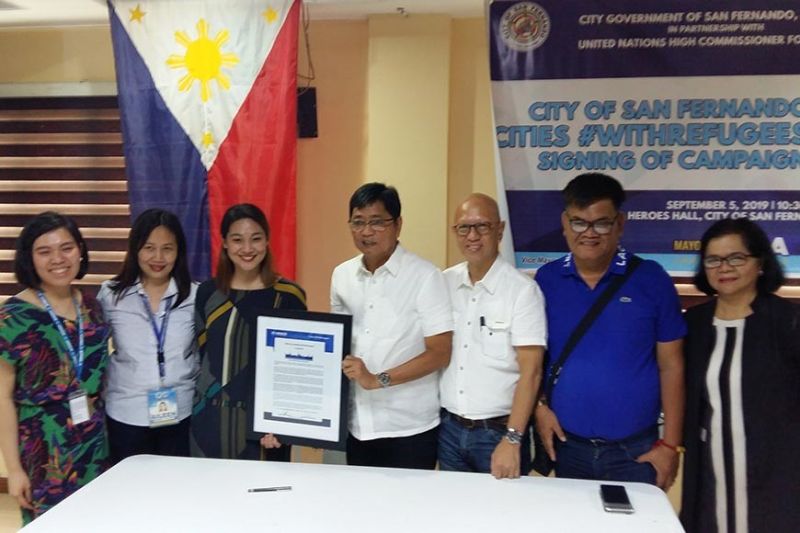 THE City Government of San Fernando on Thursday, September 5, formally joined and now stands with the United Nations High Commissioner for Refugees (UNHCR) in its Cities #WithRefugees campaign after signing the common statement of welcome and inclusiveness for urban refugees and forcibly displaced families at Heroes Hall here.

The city thus becomes the seventh local government unit to join the campaign, after the Municipality of Sta. Ana, Pampanga headed by Mayor Norberto Gamboa signed the statement last Monday. Other local government units (LGUs) to earlier sign the statement include the City of San Jose del Monte and Municipality of Sta. Maria in Bulacan and the cities of Vigan, San Fernando (La Union), and Zamboanga.

UNHCR Protection Associate Ma. Louella Gamboa told Sun.Star Pampanga that the Cities #WithRefugees campaign is being conducted for the first time in the Philippines.

“It is a relatively new campaign which started in 2018. “Cities #WithRefugees hopes to gather global public support for families who are forced to leave their homes and for refugees to be able to live in safety, have access to basic services like education and be able to support their families,” she said.

Gamboa disclosed that there are four documented refugees in the City of San Fernando and six in the Municipality of Sta. Ana, part of the total 645 recognized by the Department of Justice (DOJ).

“In the Philippines, we have a total of 645 listed since 1991 when the DOJ started recognizing these refugees. We have four in San Fernando and six in Sta. Ana. The top countries of origin are Syria and Pakistan. They come into the Philippines individually and not in big groups. The condition is they have to be physically present in the country and apply directly with the DOJ. All 645 are documented, legal and vetted by the DOJ as all legitimate refugees in need of assistance,” she shared.

Gamboa added that the Cities #WithRefugees campaign is a collective effort of the government aimed at providing refugees access to basic services to allow them to become self reliant.

“We have a range of services for refugees. Together with the UNHCR, we have an interagency committee headed by the DOJ and Department of Interior and Local Government, as well as 16 agencies including the Bureau of Immigration, Department of Foreign Affairs, Department of Labor and Employment, Department of Education, Commission on Higher Education and Department of Health, among others, covering issues of education, health, employment to documentation,” she said.

Although majority of documented refugees are in the National Capital Region, Gamboa noted that the UNHCR and DOJ are inviting more mayors in the Visayas and Mindanao to join the campaign.

“Majority of them are in NCR. That is why we are talking to more mayors in Visayas in Mindanao where we have a significant population of urban refugees there who are allowed to exercise their rights like freedom of movement. They have choices because of opportunities, areas where the standard of living is affordable, and others already got married to Filipinos. That is a consideration, too. We don’t dictate on them. We want them to exercise their rights. We give them favorable protectio. It is in fact one reason why we chose the City of San Fernando because it has a known refugee population. Besides, San Fernando is known to be a really friendly city,” she added.

For their part, both Mayor Edwin Santiago and Vice-Mayor Jimmy Lazatin welcomed the Cities #WithRefugees in San Fernando.

“Not only is San Fernando a business-friendly city but one that is socially and culturally inclusive. Helping displaced individuals or families is part of our programs as a sustainable city and a decent place to live in,” they said. (JTD with Princess Clea Arcellaz)