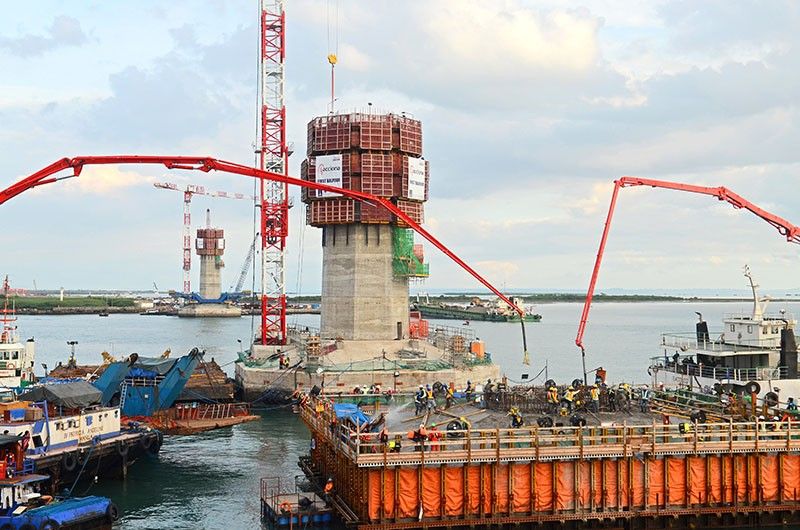 ONGOING. With a design speed of 80 to 90 kilometers per hour, the Cebu-Cordova Link Expressway is expected to serve at least 50,000 vehicles a day. This third bridge connects Cebu and Mactan Islands via the South Road Properties and Cordova. (SunStar File Photo)

AS THE Cebu economy continues to expand, infrastructure development must potentially keep up for it to sustain attracting investments and scale up its competitiveness.

While Cebu has emerged as a vital economic hub in the Philippines, it also struggles with growing urban problems such as the perennial traffic congestion and water supply, European Chamber of Commerce of the Philippines (ECCP) president Nabil Francis said.

Francis pointed out that traffic and the growing demand for water in Metro Cebu are two important problems the government must put focus into.

“The ECCP encourages the government to continue expanding its infrastructure projects through improving connectivity to further enhance the Philippines’ state of infrastructure including working closely with the private sector to expedite the rollout of flagship projects,” Francis told SunStar Cebu.

Cebu’s unprecedented economic growth in recent years has been met with congestion woes, as it struggles to modernize its poor road infrastructure and transport system.

“Bottlenecks such as perennial traffic congestion and water crisis remain,” Francis stressed, singling out the economic losses caused by traffic.

The Japan International Cooperation Agency had estimated that traffic woes in Cebu cost around P1.1 billion in daily economic losses. On the other hand, the Metropolitan Cebu Water District had projected greater water demand from the current 400,000 cubic meters due to exponential population growth in one of the country’s fastest growing urban centers.

“Cebu continues to attract opportunities both here and abroad, as a viable investment destination aside from Metro Manila,” Francis said.

But problems like traffic aren’t always welcome to investors, thus the need for the government to address it if it wants Cebu to sustain its attractiveness as an investment magnet.

“Consequently, it (Cebu) has the potential to become a regional hub for competitive and emerging industries such as eco-tourism and creative industries, which will significantly increase gross domestic product contribution,” the ECCP official said.

Infrastructure buildup in Cebu had started to take shape.

Its international airport continues to expand and open new routes to overseas destinations. The third bridge that will connect Mactan Island to mainland Cebu is on track to finish its construction by 2021 while several key infrastructure projects like the already approved new international port and the proposed fourth bridge have yet to take off.

On mass transport, the Department of Transportation (DOTr) earlier bared the expanded and improved route of the Bus Rapid Transit (BRT) system which will now include some routes through Talisay City.

DOTr Undersecretary Mark de Leon earlier said the Phase 1 of the BRT system, now expanded to 39.88 kilometers from 21.58 km, will be partially operational before December 2021.

The BRT is part of the DOTr’s Intermodal and Integrated Transport System for Cebu, which also includes a monorail as the main backbone of Cebu’s transport infrastructure. (CSL)