Editorial: Kill all the lawyers 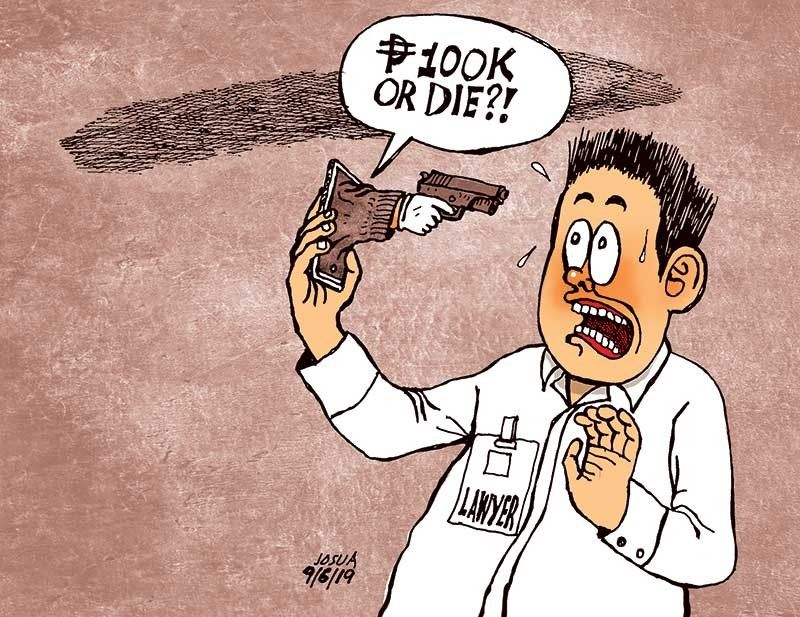 THE line was uttered by the character Dick the Butcher in William Shakespeare’s Henry VI. Dick was henchman to the rebel Jack Cade, who thought he could be king if he messes up law and order. Killing all the lawyers meant clearing the road to the top, as Dick would suggest. Lawyers embody a society of law and order. They are the ones you need to get rid of if you are to make shortcuts to power.

The series of attacks on lawyers in recent years could show separate narratives, each shooting a tale by itself, unrelated to the others and doesn’t really point some form of orchestration. Well, at least, while authorities are still in the thick of investigations.

The attempt on the life of lawyer Inocencio de la Cerna Jr. may be traced to a number of celebrated cases. He had a “brief” counseling stint on former Medellin, Cebu mayor Ricardo Ramirez, who was tagged a drug personality by the police. Ramirez was killed by unidentified men in a hospital in the north where he was detained. De la Cerna is lawyer for former Bohol Provincial Board member Niño Rey Boniel, who was accused in the murder of his wife, then mayor of Bien Unido, Bohol. He is also counsel in a P3.5-billion stocks swindling case, around which are angry stakeholders.

“This latest violence adds to the list of numerous unsolved cases of killings and attempted killings in Cebu and in the whole country perpetrated by motorcycle-riding assassins who remain unidentified. This latest attack directed to a lawyer in the person of Atty. de la Cerna is not only an attack against the life of an officer of the court, but is also an assault to the rule of law and to the sensibilities of peace-loving Cebuanos,” read a statement from the Integrated Bar of the Philippines Cebu Chapter.

Early last year, Jonnah John Ungab, lawyer and then vice mayor of Ronda town, wasn’t as lucky as de la Cerna. Two gunshots to his head killed him as he was stepping out of the Qimonda Compound after a hearing. There was former Cebu City assistant prosecutor Mary Ann Castro, shot dead while driving her car by motorcycle-riding gunmen.

Negros Oriental also saw a number of lawyer killings, a good number of them linked to cases involving farmers in land disputes. Lawyers handling environment cases are also being killed in many parts of the country.

As we said, while each case may tell isolated stories, what is however clear is the persistent pattern of killings involving law practitioners. Recently, a number of Cebu City lawyers got extortion and death threats, some of them via text messages and emails. Unfortunately, these threats don’t appear empty with all the consummated murders of their colleagues.

There is a growing culture of impunity and government is mummified. In fact, right off as this administration started, we saw leaders themselves whose mantra was “kill.” It was culture-forming in the time of infectious memes: kill. So this is where all the encouragement brings us to, citizens seduced by the idea of taking matters into our own hands, vigilante-style: to kill all the lawyers. And there’s a big chunk of the populace, consenting to it because, anyway, the purge will bring the country to some kind of enlightenment, purification.

If only people can fully fathom the gravity of the proposition: kill all the lawyers.