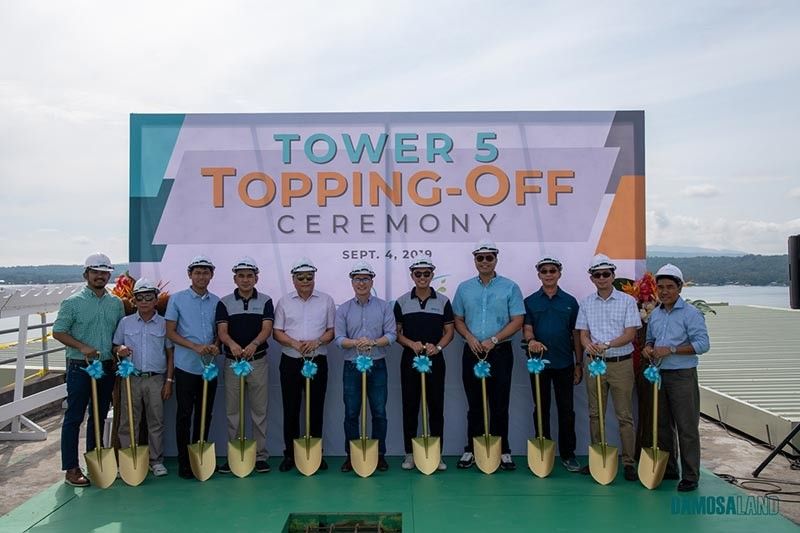 DAVAO. Seawind by Damosa Land, Inc. (DLI) celebrates two milestones on Wednesday, September 4, 2019 -- the blessing of Tower 4 and the topping off for Tower 5. DLI topped off for Tower 4 just last April 2019 with 229 units completed to date. On the other hand, Tower 5 has 214 units built, which is set to be completed in May 2020. (Contributed photo)

DAMOSA Land Inc. (DLI) noted that they are on track with the completion of their first vertical development, Seawind, in Sasa, Davao City.

Ricardo Lagdameo, first vice president of DLI, said the construction of the project is ahead of its schedule.

“It shows that we are sticking to our timetable, and of course, our commitment towards our customers. When we tell them that their units will be ready at a certain time, as much as possible, we try to stick to those deadlines,” Lagdameo said.

He said Tower 5 is two to three months ahead of its schedule in terms of completion.

“Even with the last tower, Tower 6, we’re also a few months ahead of schedule. Of course, what that means is that we can deliver our commitment to our buyers,” Lagdameo said.

The six-tower Seawind is targeted to be completed in 2020. Its buyers are composed of seasoned professionals, start-up families, and overseas Filipino workers.

Damosa Land has allocated only 25 percent of Seawind to building spaces, while 75 percent is dedicated to open living spaces such as the clubhouse, pocket parks and walkways.

The company said in a statement that Seawind will also have a commercial complex with a public transportation terminal that will conveniently provide the basic services, and items that the community needs.

Seawind started development in 2014 and was officially launched in August 2015.