Kin of 2 freed Chiong convicts want them to surrender 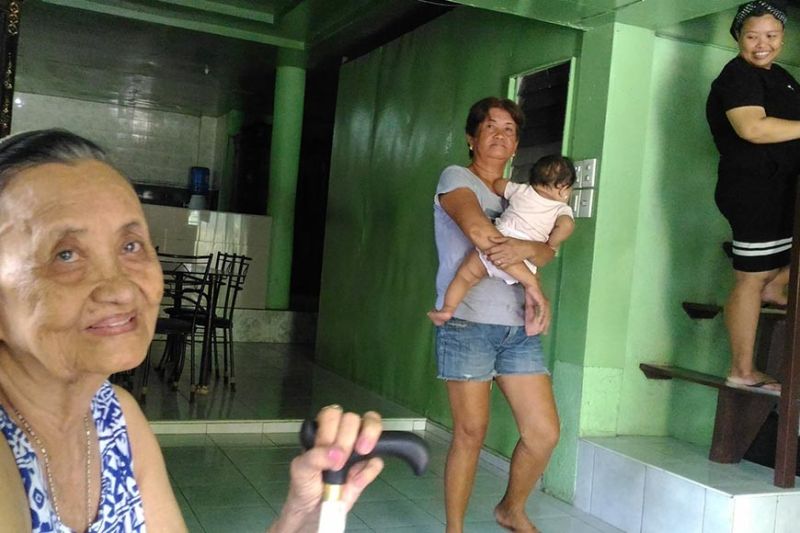 Nanay Bering Caño (left), along with sisters Febby Caño Comon (right) and Hertrudes Caño Salazar (center), urge Ariel Caño to surrender to the authorities. Ariel Caño is one of those convicted in the Chiong case. (SunStar photo / Amper Campaña)

THE families of Ariel Balansag and Alberto Caño are urging the two men convicted in the Chiong case to heed President Rodrigo Duterte’s order and surrender to authorities.

Balansag, Caño and Josman Aznar, who was also convicted in 1999 of the kidnapping and serious illegal detention of sisters Marijoy and Jacqueline Chiong in 1997, were released from jail after they benefited from the Good Conduct Time Allowance (GCTA) law or Republic Act (RA) 10592.

“It’s up to them. It’s their decision. But they should go back inside. Then again, we don’t know, maybe they’re already back in jail,” said Getrudes Salazar, Caño’s older sister, in Cebuano.

On Wednesday, Sept. 4, 2019, President Rodrigo Duterte demanded the surrender within 15 days of some 1,914 released inmates under the GCTA law.

Duterte issued an ultimatum: “P1 million per head, dead or alive” if they did not return within that period.

Phoebe Comon, Caño’s youngest sister, said they had not heard from him since they learned about the release, as he did not return to their house in Barangay Panadtaran, San Fernando, Cebu.

“We were not worried because his wife lives in Manila. Plus I know my older brother. He would do the right thing,” Comon said in Cebuano.

She asked Duterte to reopen the Chiong case, believing that her brother and the six others convicted in the case deserve the President’s clemency.

“There may be a chance they’ll be acquitted. In the documentary we saw, the defense witnesses were not given the chance to be heard,” she said in Cebuano.

Salazar said they were happy and sad at the same time when they found out about their release.

“We thought he’d be able to come home after 22 years and we could see him. But he never showed up. You could ask the neighbors,” she said in Cebuano.

SunStar Cebu tried to interview Balansag’s half-sister, Lanie Tagoy, who lives in the same barangay, but she was not at home. Her husband, Danilo Mayang, faced the media.

Mayang said they don’t know where Balansag is. However, he said it would be best for Balansag to surrender.

“We will advise him to return to jail or we will surrender him to authorities. But that is, if he shows up. They’ve only been given 15 days to surrender so time is of the essence,” Mayang said in Cebuano.

“This is because we have had experiences that we can only describe as condemnable,” Gica said in Cebuano, referring to media accounts of drug suspects turning up dead immediately following informal statements from the President wanting drug suspects dead.

Gica said the application of the GCTA on Aznar’s sentence of reclusion perpetua and death (later made reclusion perpetua following the repeal of the death penalty law in 2006) means Aznar and his other co-accused have served their punishment.

While still insisting that the case against his client was baseless to begin with, Gica said justice has already been served “in the eyes of the law.”

“This young man should now be allowed to rebuild his life,” Gica said of Aznar, adding that hunting him now is like accusing him of the same crime again.

“Why should the public be looking for him? Why should anybody be looking for them?” he said of Aznar, Caño and Balansag. “They have served their sentence. They have gone home and have a right to be left alone.”

Gica said he has not heard from Aznar since the latter’s release. He said he cannot even confirm if Aznar had been set free, saying he read about it only in the papers.

Retired Regional Trial Court Judge Meinrado Paredes, for his part, said there might be a legal basis for the President’s ultimatum since some of the convicts’ release was illegal.

“The possible justification for that is because those released convicts of heinous crimes are fugitives from justice because they violated the law,” he said.

“Also, the President is the chief executive. He has an oath as President to faithfully execute the law. But with regard to the ultimatum of 15 days, I am not certain of its basis,” he said.

Those who were released “legally” under the GCTA law, or those who were not recidivists, habitual delinquents, escapees or those convicted of heinous crimes, could file a petition for the issuance of Writ of Amparo.

“There is a threat on their life, liberty and security. But this only applies to instances of legal killings and threats, threat of extrajudicial killing and forced disappearance,” he said.

Those who are back in jail can file for the issuance of Writ of Habeas Corpus, he said.

“The IRR must conform to the law. It’s their prerogative to review the guidelines. The IRR should not contradict the law. Otherwise, those makers of IRR will look like they are the law-making body,” he added.

In a related story, Thelma Chiong and her husband Dionisio went to the office of the Criminal Investigation and Detection Group (CIDG) 7 to inquire about the whereabouts of Aznar, Balansag and Caño.

The CIDG 7 has been tasked to look for them by Camp Crame, said Thelma. She understood that finding them might not be easy, considering that 22 years had passed.

“They don’t look the same as the pictures shown on TV. They’ve aged. Josman is now 47. He was 25 during that time,” she said in Cebuano.

The Chiong couple also thanked and praised the President for issuing the ultimatum to the freed convicts. However, Thelma thought that 15 days were too long.