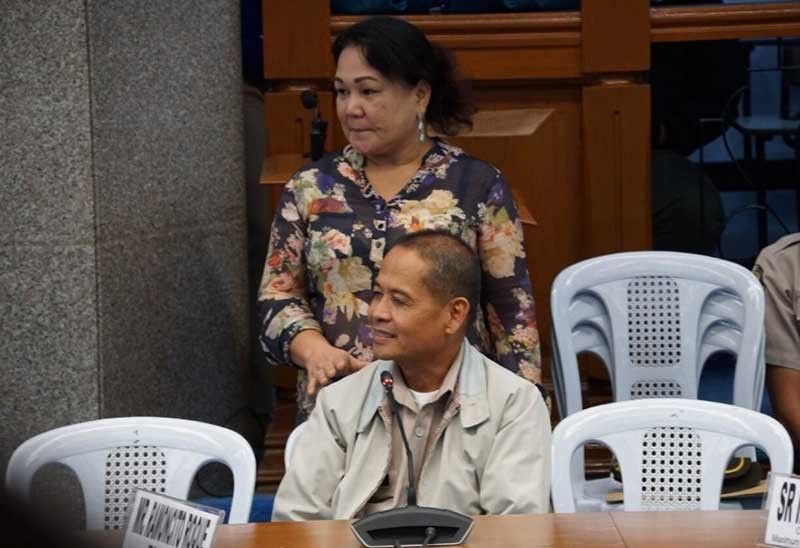 THE common-law wife of a person deprived of liberty (PDL) at the New Bilibid Prison said she paid P50,000 to facilitate the release of her husband, confirming reports that some personnel at the Bureau of Corrections (BuCor) were using the good conduct time allowance system to extort money.

Yolanda Camilon appeared before the Senate Blue Ribbon committee at around 10 p.m. Thursday, September 5, to narrate her first-hand experience.

"GCTA for sale kasi inalok po sa amin (because it was offered to us)," she said.

Camilon's arrival at the Senate Thursday night allowed the committee hearing to resume. Blue Ribbon chairman Richard Gordon suspended the hearing scheduled in the afternoon to wait for Camilon, whom he described as a vital witness.

Camilon said she decided to testify because the BuCor personnel failed to deliver their promise to release her husband early.

(I am apprehensive. But I know that I have nothing to fear because I am telling only the truth. This is also for those who will be left inside, those who have grown old and even died inside without assistance from the personnel.)

Since her husband is due for release in October 2019, which is barely a month away, Camilon said she wanted to get her money back.

Camilon alleged that she had given a total of P50,000 to a certain Mabel Bancil, who was identified later to be Correctional Senior Inspector Maribel Bancil.

Others have reportedly given P300,000, based on her husband's account. She said she personally knows 10 or 20 others who have also shelled out cash to facilitate the early release of their relatives from the national penitentiary.

Camilon said she, accompanied by Bansil, handed over an envelope containing P10,000 to a certain "Sir Chito", who was identified to be Ramoncito Roque, chief of the BuCor Inmate's Documents Processing Division.

Roque, who also appeared before the Senate, said he did not want to accept the envelope with the cash, but they forced him to accept it.

"Pinilit po nila sa akin. Sabi ko nga sa kanila, baka ako'y mapapasama dyan (They forced it on me. I told them that it might get me in trouble)," he said.

Roque said he sought out Camilon and her husband a few days later and returned the money.

Camilon, in her testimony, said Bancil, who had allegedly claimed to be a relative of Roque, had wanted to her to personally hand over the cash to Roque at the latter's residence within the BuCor compound to show that Roque was aware of the transaction.

She said Roque had asked her when she wanted her husband to be released. They agreed on March 1, 2019.

After that initial meeting, Camilon said she met with Bancil twice in February to hand over the balance of P40,000, given in two equal installments.

She was dismayed when her husband was not released on March 1. Instead, she was told to wait until April 2019.

Camilon said she frequently followed up on the status of her husband through text messages to a certain Veronica Buno, who was identified to be another custodial officer at BuCor.

She also frequently went to the documents section to follow up on her husband's release. Camilon said she was able to secure her husband's prison record, which at the time showed that he was due for discharge in June 2019.

Camilon said she also went directly to Roque, who referred her to his assistant Ruperto Traya Jr.

Traya had printed out a copy of her husband's record and told her that her husband was due for release on October 13, 2019.

Based on her husband's synopsis or record, Camilon said her husband had served two years, two months and one day. The document showed that her husband was to be released in April 20, 2018 at the earliest and April 19, 2021 at the latest.

With GCTA, which is credited as time served and deducted from an inmate's prison term, Camilon said the document showed that her husband had served three years, eight months and seven days. His minimum prison term would end on October 14, 2016 while the maximum is until October 13, 2019.

Camilon said Roque had assured her that this is "subject to adjustment".

Asked by Gordon whether she was aware of what happened to Traya, Camilon said she learned from news reports that Traya was recently gunned down. Traya was shot dead on August 27, 2019.

She said Roque had told her that her husband was granted GCTA of 90 days based on a document from the Bureau of Jail Management and Penology, but they were going to honor only 25 days.

Camilon questioned the decrease. The following day, she said Roque told her that they were going to grant 40 days GCTA.

Roque, for his part, said Camelon's husband was entitled to 95 days, broken down as 25 days GCTA and 70 days preventive imprisonment. Roque said Camilon demanded that all 95 days be credited.

Camilon said she was again told to wait in August because personnel at the documents section were very busy, even working 24 hours, with the processing of several release orders for reclusion perpetua inmates.

The GCTA, which is granted to qualified inmates with good behavior, is provided for under Republic Act 10592.

The scheme caused an uproar following reports that former Calauan mayor Antonio Sanchez, who is serving seven life terms for the rape and murder of college student Eileen Sarmenta and the killing of her friend Allan Gomez in Laguna, was ordered released.

But three of the Chiong 7, men who were meted two life terms each for the 1997 kidnapping and serious illegal detention of the Chiong sisters, were released. The release orders for Josman Aznar, Ariel Balansag and Alberto Caño were signed on August 16, 2019.

Under the law, "recidivists, habitual delinquents, escapees, and persons charged with heinous crimes" cannot benefit from GCTA. The implementing rules and regulations, however, cover convicts of heinous crimes.

Since 2014, a total of 1,914 convicts of heinous crimes have been released, including more than 200 whose applications were processed after the Supreme Court ruled in June 2019 in favor of the law's retroactive effectivity. (MVI/SunStar Philippines)