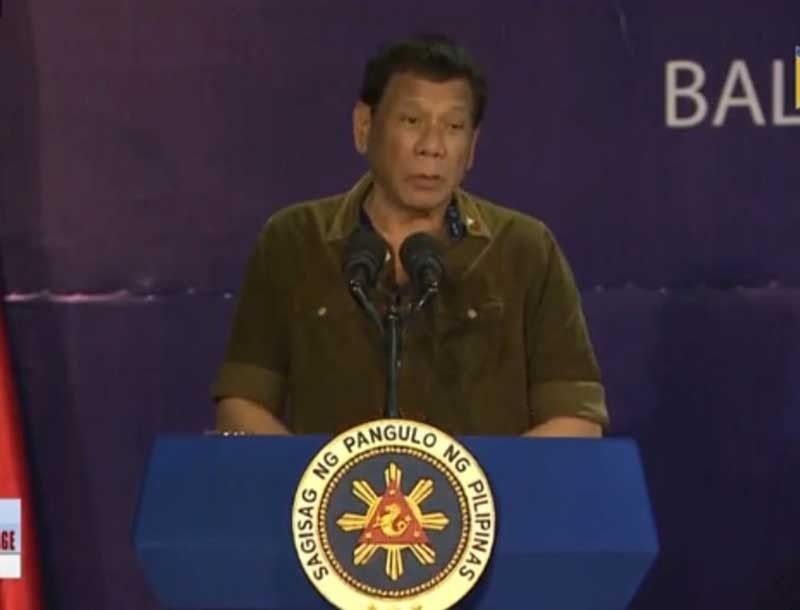 (UPDATED) President Rodrigo Duterte on Friday, September 6, said he still believes in Nicanor Faeldon even after he fired him as director general of the Bureau of Corrections (BuCor) following the uproar over the early release of heinous crime convicts based on good conduct.

He recalled how Faeldon, as then chief of the Bureau of Customs, reported to him about a businessman in Cebu who keeps cigarettes with fake tax stamps in three warehouses.

"We earned P37 billion (in taxes) because of that report by Faeldon," the President said in a speech delivered after he led the groundbreaking ceremony for the permanent housing project for landslide victims in Naga City, around 20 kilometers south of Cebu City.

He was referring to the warehouses of Mighty Corporation that were raided in 2017. The homegrown tobacco company paid its tax liabilities.

Duterte demanded Faeldon's immediate resignation on Wednesday night, September 4, and, in the same breath, ordered heinous crime convicts who were released because of good conduct time allowance (GCTA) to surrender within 15 days.

Faeldon, a former mutineer, immediately packed his bags and vacated his quarters at the BuCor compound at about 1 a.m. Thursday, September 5, saying he bows to his "commander-in-chief's order without any hard feelings".

The President later re-appointed Faeldon to the Office of Civil Defense and later on tasked the latter to lead the BuCor in November 2018.

The GCTA, which is granted to qualified inmates with good behavior, is provided for under Republic Act 10572.

The scheme caused an uproar following reports that former Calauan mayor Antonio Sanchez, who is serving seven life terms for the rape and murder of college student Eileen Sarmenta and the killing of her friend Allan Gomez in Laguna, was ordered released.

Under the law, "recidivists, habitual delinquents, escapees, and persons charged with heinous crimes" cannot benefit from GCTA. The implementing rules and regulations, however, cover convicts of heinous crimes.

Since 2014, a total of 1,914 convicts of heinous crimes have been released, including more than 200 whose applications were processed after the Supreme Court ruled in June 2019 in favor of the law's retroactive effectivity.

Police have activated tracker teams to locate about 1,700 heinous crime convicts who were released before June 2019.

If they fail to surrender within 15 days, Duterte said he was considering a P1-million bounty on each convict "dead or alive".(SunStar Philippines)