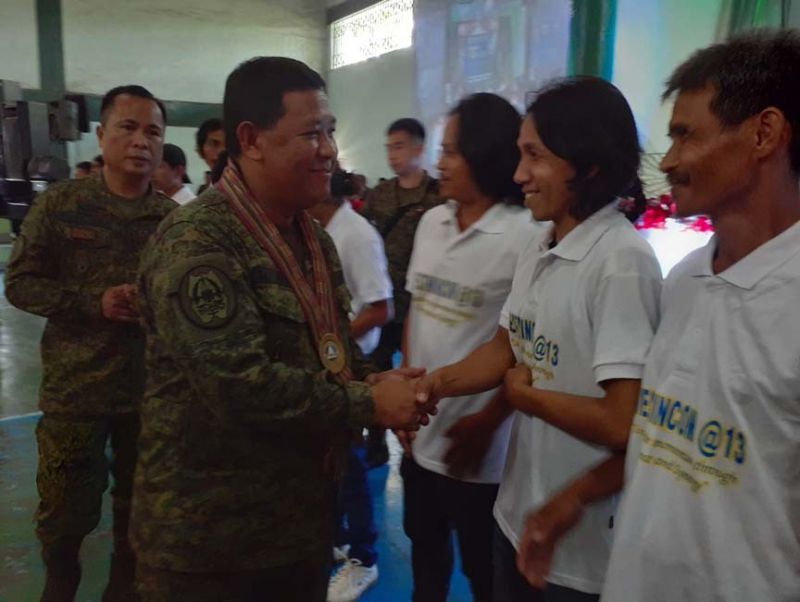 EIGHTEEN former rebels received relief and cash assistance from the Armed Forces of the Philippines (AFP), through the Western Mindanao Command (Westmincom), in Zamboanga City.

General Benjamin Madrigal, AFP chief-of-staff, led the distribution of the assistance during the 13th anniversary celebration of Westmincom. He was assisted by Lieutenant General Cirilito Sobejana, Westmincom chief.

The 18 former rebels are undergoing a five-day livelihood training and immersion on coconut technology together with 23 soldiers at the Philippine Coconut Authority-Research Center in this city.

The training, aimed to provide livelihood opportunities for the former rebels and soldiers, started Tuesday and ends on Saturday.

Sobejana said they were among the 181 rebels who surrendered during the first semester of this year.

“I would like to acknowledge their presence,” Sobejana said as he presented them to the audience during the program that marked the 13th anniversary.

Meanwhile, Madrigal has ordered to screen and determine who among the former rebels possess the qualification to enlist into the military service.

Madrigal issued the order to Sobejana after one of the 18 former rebels signified his interest to become a soldier.

The former rebel has signified his intention to enlist into the military service while Madrigal was handing them the groceries and cash assistance during the anniversary celebration of Westmincom.

Madrigal is the guest of honor and keynote speaker in the 13th anniversary celebration of Westmincom Friday.

Sobejana said they will check the records of the former rebels to determine if they possess the qualification to be soldier.

“They can be, for as long as they are qualified,” Sobejana said.

in May this year, 84 former New People’s Army (NPA) rebels have joined the Armed Forces of the Philippines and were given the rank of private after they graduated after months of rigorous military training.

The 84 former NPA rebels were among the 275 Army recruits who graduated from candidate soldier courses administered by the Army’s 4th Infantry Division based in Cagayan de Oro City. (SunStar Philippines)