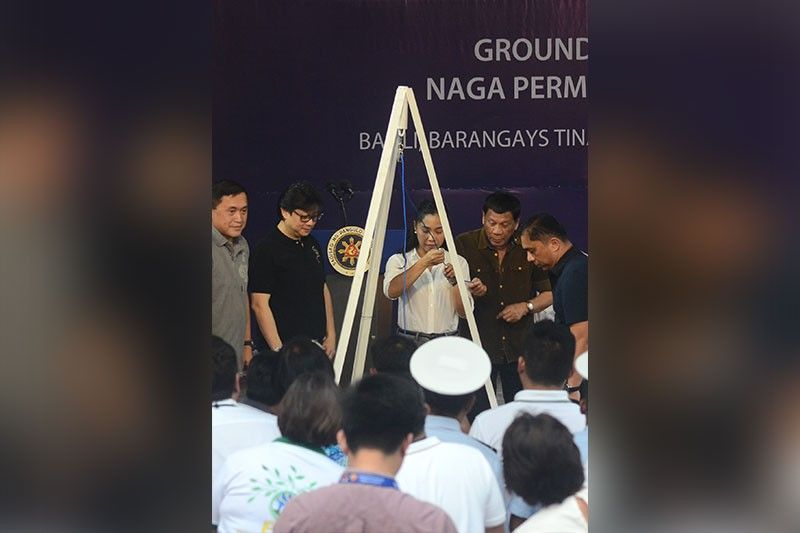 CLOSE to 200 families who survived a massive landslide in the City of Naga on Sept. 20, 2018 and have availed themselves of the National Housing Authority’s (NHA) project will be given house and lot units for free.

This was announced by President Rodrigo Duterte on Friday, Sept. 6, 2019 during the groundbreaking ceremony and time capsule laying for the 192 units promised to those who availed of the Naga permanent housing project.

Speaking in Visayan, Duterte said: Weren’t beneficiaries asked to pay P400 a month? My order to you [General Manager Marcelino Escalada Jr.], the NHA, is that the housing units be given as gifts to beneficiaries of the Naga permanent housing project. The housing projects for families affected by Typhoon Sendong and those in Zamboanga that were destroyed at the time of armed conflict, I have ordered everyone in government that is listening to give the houses and lots to beneficiaries for free.

The President’s pronouncement came a month after Naga Mayor Valdemar Chiong heard of reports that the NHA allegedly planned to implement a socialized housing scheme instead of the free housing assistance promised to those who had availed themselves of its program.

Before serving his 90-day preventive suspension, Chiong wrote the NHA to seek clarification since the City Government has not even set equity conditions to its housing beneficiaries since they are calamity survivors.

In an interview hours before the groundbreaking ceremony, Acting Mayor Kristine Vanessa Chiong said the beneficiaries do not have to pay for their housing units from the National Government.

“The landslide-affected families will have no counterpart in this housing project. It is for free, just like the City-funded housing project,” she said.

Also during his speech, the President described the groundbreaking ceremony as a “fulfillment” of a promise for a more resilient resettlement for the landslide survivors.

It also displaced some 1,947 families who had to temporarily reside in 11 evacuation centers across the city for almost three months.

In the aftermath of the landslide, the Department of Environment and Natural Resources (DENR) delineated the affected area as a “No Permanent Habitation Zone” or “Danger Zone.”

This prompted the DENR to recommend the permanent relocation of some 418 families who were living in this area.

Of the number, around 213 families had opted for relocation and will benefit from the Naga Permanent Housing Project of the National Government and the ongoing construction of the City-funded housing project.

The NHA had committed to build 192 houses on a portion of the Balili Property in Barangay Inoburan that was identified by the Mines and Geosciences Bureau as safe for construction.

The City, on the other hand, had pledged to build around 50 houses in Barangay Tina-an.

Some families availed themselves of the Financial and Building Assistance extended by the City Government.

In an earlier report, the City Government gave P150,000 each to around 444 families who used to live in the “maroon” or critical zone, which is within Ground Zero of the landslide. They were prohibited from returning to their homes to avoid untoward incidents.

As soon as they received the cash aid, they were required to leave the evacuation site and relocate to another area far from where their houses used to stand.

Those who will benefit from the National Government’s project were landslide survivors and families residing within the one-kilometer no-build zone.