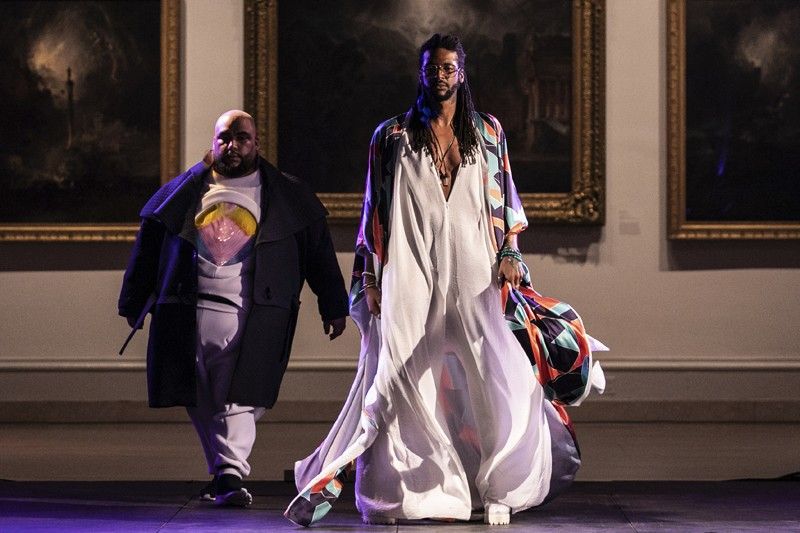 NEW YORK. The Travis Oestreich collection is modeled during the dapperQ fashion show at the Brooklyn Museum on Thursday, September 5, 2019, in New York. (AP)

NEW YORK -- In celebration of gender-fluid fashion and inclusion of all kinds, the queer-style digital magazine dapperQ threw a runway party at the start of New York Fashion Week, filling the Beaux-Arts Court of the Brooklyn Museum with invited guests and nearly 2,000 members of the public.

It was the sixth annual Queer Runway Show at the museum for dapperQ, which uses the rallying cry of "ungendering fashion". Marking its 10th year in business, the site enlisted 10 brands Thursday night, September 5, to dress an array of models of all colors, ages and sizes, large and small, on the gender binary and off.

One model used a wheelchair and another a single crutch. Professional trans models strutted and camped alongside YouTube and Instagram influencers. Zach Barack, the openly trans actor who appeared in the recent blockbuster "Spider-Man: Far from Home," was among the walkers.

And the joyous crowd ate it up, tossing beach balls into the air surrounded by European paintings on the walls as upbeat music filled the space. Models showed off underwear sets from sponsor TomboyX and colorful caftans, sharply tailored suits, shorts outfits and eveningwear from other brands, including Sharpe Suiting, Landeros New York, Halz, Stuzo, and the Australia-based Shane Ave.

Attendee Suhaly Bautista-Carolina called it an important evening for the LGBTQ community and the fashion industry as a whole.

"It celebrates the queer community within fashion week," Bautista-Carolina said. "Fashion week is such a celebratory moment in New York and to be included in this moment is just a very beautiful and important thing."

The models had a blast as well, earning cheers from the jubilant crowd. B. Hawkes Snipes, who played a runway contestant on the FX series "Pose," warmed up the room from the runway at the start of the show wearing a flowing bright red gown.

Hester Sunshine of the revived "Project Runway" looked on from the front row.

"It's really cool that this is happening," said Sunshine, who came in second on the show's first season. "The LGBTQ community has been such a big part of fashion since the beginning so it's really nice to be recognized as its own presence."

Barack said he has "never really done fashion stuff" but appreciated the chance to help celebrate "queer bodies and all the intersections that they lie in and all the places they sit. I'm really excited to be a part of it."

Anita dolce Vita, the publisher of dapperQ and the executive producer of the show, said "queer fashion to me and in our community is fashion for everyone," no matter your sexual orientation, gender identity or gender presentation.

The show "really breaks down and dismantles the binaries that we often see on traditional New York Fashion Week runways," she added.

With more transfemmes on the covers of magazines and a growing popularity for "androgyny" in fashion, progress has been made in the mainstream industry, dolce Vita said, but the way queer fashion is interpreted remains filtered "very much through the lens of hetero-normativity," with white, tall and skinny among the defaults.

"Clothing should be for all people," she said. "We don't want just gay men who are designing for what their vision of a perfect woman is. We want queer style." (AP)