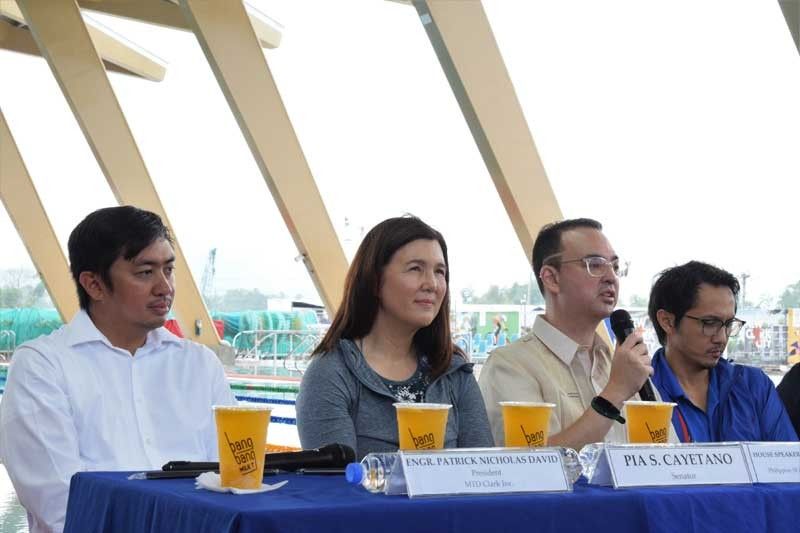 CAPAS, Tarlac -- Triathletes belonging to the Philippine team has lauded the government for building a world-class sports facility at New Clark City which will be utilized during the South East Asian (SEA) Games on November 30 to December 11.

The national athletes trained at the world-class Aquatics Center and Athletics Stadium in preparation for the first New Clark City Triathlon scheduled this coming October.

House Speaker Alan Peter Cayetano graced the event and he was accompanied by his sister, Senator Pia Cayetano, who joined the triathletes during the training.

Alan Cayetano said that the 30th South East Asian (SEA) Games is “meant to honor athletes and reignite the passion for sports" in the country.

He stressed that sports is integral in harnessing the mind and soul of the young people.

“After the SEA Games, kung golden age ngayon ng infrastructure sa Build-Build-Build, I think it will also usher in a golden age of sports development,” he said.

Pia Cayetano for her part said her dream is that the athletes would be housed in a facility like a family-run type of residential area where they will be taken care of.

"And within the premises are (the sports) facilities that they have. There is that opportunity with the way this has been planned for that to become a reality,” she said, referring to the New Clark City sports complex envisioned to be a training center for national athletes.

Huelgas expressed his support for the government in building the new sports facilities, which he said, “will cater not only to our national athletes but also to every Filipino who wants to dream to become a national athlete like me.”

The Athletics Stadium and the Aquatics Center are part of Phase 1A of the National Government Administrative Center in New Clark City built by BCDA and its joint venture partner MTD Clark, Inc.

“We did not build these facilities just for the SEA Games. They were built as part of New Clark City, the country’s new metropolis that will be smart, resilient, and sustainable,” Dizon said. (With Charlene Cayabyab/SunStar Pampanga)