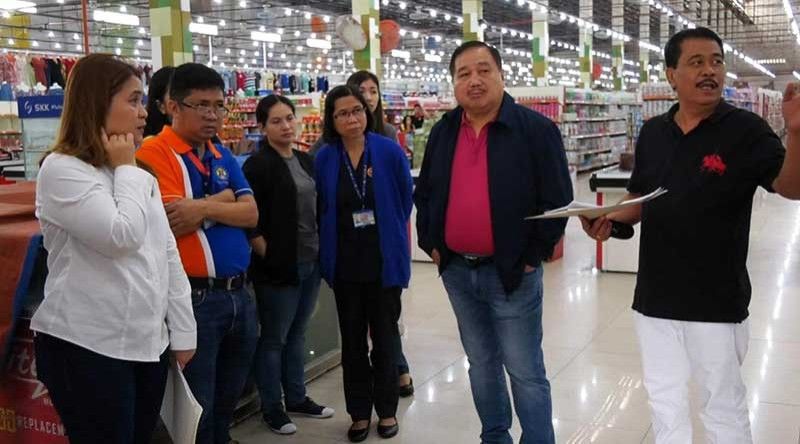 PAMPANGA. Mayor Darwin Manalansan asks the Chuzon Task Group led by DILG Director Myrvi Fabia to fast track the inspection and assessment of the structural integrity of Chuzon Supermarket in Floridablanca for the possible reopening of its selling area which was given the permit to operate. (Photo courtesy of Daniel Ombina)

FLORIDABLANCA, Pampanga -– After passing the needed clearances and permits, Mayor Darwin Manalansan urged the National Government to give them the go signal for the reopening of Chuzon Supermarket’s selling area.

This was disclosed by the mayor during the inspection of the Chuzon Task Group on Friday, September 6, by officials of the Department of Interior and Local Government (DILG), Department of Public Works and Highways (DPWH), Office of Civil Defense (OCD), Philippine National Police (PNP), Bureau of Fire Protection (BFP), Provincial Engineering Office, and the municipal government.

Earlier this year, a 6.1-magnitude earthquake destroyed the Chuzon Supermarket in Porac town, causing the demise of some shoppers and workers. This resulted in the suspension of operations of all branches of the said supermarket in different parts of Luzon.

Manalansan lamented that in the town alone, some 120 Chuzon workers lost their jobs due to the temporary suspension of operations imposed by the National Government in all the branches of the supermarket.

He added that the workers received no continuous compensation and even assistance from the supermarket and the government.

The mayor said they issued all the necessary permits upon passing the structural evaluation of the concerned offices.

“This should be reopened very soon because the workers here do not earn any income now. But, we have to abide by the orders of higher officials. Hence, I ask for their quick response and please act now,” the mayor appealed.

DILG Provincial Director Myrvi Apostol-Fabia, who led the inspection, said the responsibility of the task group is to gather all the technical reports of the investigation such as clearances and recommendations from the concerned agencies.

“After meeting all the requirements and clearances set by the concerned agencies, these must be submitted to the regional office up to the national government. Upon assessment and analysis, it is up to higher authorities to decide whether to reopen the supermarket or not,” she added.

“It adhered to the Republic Act 9514, also known as the Fire Safety Code of the Philippines. In fact, the Chuzon Floridablanca was issued the fire safety inspection certificate on August 28, 2019, intended only for the selling area,” Mamawan said.

On the other hand, DPWH District Engineer Gregorio Audea, Jr. said that Samuel Chu, owner of the supermarket, hired Engineer Wilfredo Lopez to undertake a structural evaluation of the Chuzon Supermarket branch in Floridablanca.

“Engineer Lopez was a former chief of the structural design division of the DPWH in Central Office and is now a private and an accredited structural engineer,” Audea disclosed.

In a letter addressed to the municipal mayor and municipal engineer here, Lopez stated that in his initial assessment, the rear selling area may be opened for operation.

“The three-storey structure at the front is recommended for temporary closure until such time the final structural evaluation is completed. As a precautionary measure, however, the entrance and exit portions at the ground floor can be utilized,” Lopez also stated in his letter.

Furthermore, a representative from the Office of Civil Defense (OCD) said that the operators should install fixed bolts for shoring jacks.

The OCD suggested to put up a public address system and signage to give constant directions to customers about the entrance and exit doors of the supermarket.

They also recommended the conduct of fire and earthquake drills so that workers and even customers would be given trainings and hindsight on what to do in times of disaster. (Keanu Aebramh G. Costales/Pampanga PIO)