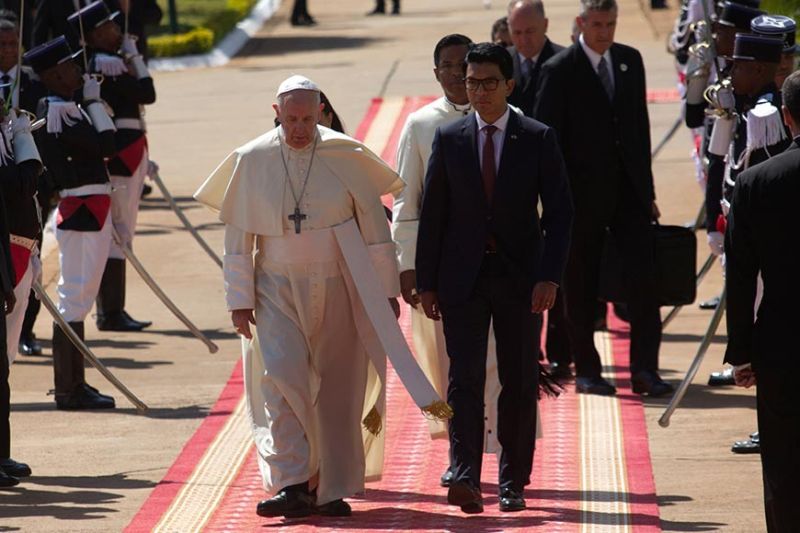 Pope Francis and Madagascan President Andry Rajoelina, right, arrive at the Ceremony Palace in Antananarivo, Madagascar, Saturday, September 7, 2019. Francis is in Madagascar for the second leg of his weeklong trip to Africa. (AP)

ANTANARIVO, Madagascar -- Pope Francis denounced the illegal logging and exploitation of Madagascar's unique natural resources on Saturday, September 7, as he opened a visit to the Indian Ocean nation by urging the government to fight the corruption that is ravaging the island's ecosystem and keeping its people in "inhumane poverty."

Francis called on President Andry Rajoelina to provide Madagascar's people with jobs and alternative sources of income so they aren't forced to cut down trees to find fertile soil, poach the island's wildlife, and engage in contraband and illegal exportation of its diverse flora, fauna, and mineral resources.

"The deterioration of that biodiversity compromises the future of the country and of the earth, our common home," Francis warned Rajoelina and other government authorities as he began the second leg of his weeklong trip to southern Africa.

Environmental groups and Transparency International have long highlighted the illegal logging of Madagascar's rosewood forests and other endangered tree species as evidence of the rampant corruption that has made multimillionaires out of a few "rosewood barons" who have plundered the island's northeastern forests.

"Your lovely island of Madagascar is rich in plant and animal biodiversity, yet this treasure is especially threatened by excessive deforestation, from which some profit," Francis said. He cited forest fires, poachin,g and the "unrestricted cutting down of valuable woodlands" as particular threats.

More so than any pope before him, Francis has made environmental concerns a pillar of his papacy, linking global warming to the persistent exploitation of the world's poor by the wealthy. He has also frequently called attention to the devastation wrought on the poor by corruption, often calling public officials to account on his foreign trips.

Transparency International, which ranks Madagascar among the most corrupt countries, has accused local public officials of complicity or negligence in the illegal logging, mining of gold and sapphires, and the poaching of tortoises, turtles, and exportation of lemurs.

In his speech Saturday, Francis urged Rajoelina, who came to power on a campaign to fight corruption, to make good on his pledges.

"I would encourage you to fight with strength and determination against all endemic forms of corruption and speculation that increase social disparity, and to confront the situations of great instability and exclusion that always create conditions of inhumane poverty," he said.

Francis, the world's first pope from the global south, acknowledged that some of the island's poor have no choice but to cut down forests to find soil or extract minerals in illegal ways that damage the environment.

"So it is important to create jobs and activities that generate income, while protecting the environment and helping people to emerge from poverty," he said.

Rajoelina promised to look out for the interests of all, especially the poor.

Among the groups trying to protect Madagascar's environment is Catholic Relief Services, the humanitarian arm of the U.S. bishops conference. The group has had a presence on Madagascar for five decades, and has focused much of its work on helping the rural poor find alternatives to cutting down trees for firewood or using slash and burn techniques to clear new land for agriculture.

"We work a lot to try to prevent that and work with farmers to help them with new techniques to kind of re-energize the soil so that they could use it again," said James Hazen, CRS country representative.

Philip Boyle, British ambassador to Madagascar, estimated that 200,000 hectares (about 495,000 acres) of forest a year are lost in Madagascar and by some projections most of the damp, moist forest will be lost by 2040.

"Unless there are measures to prevent mass deforestation and mass reforestation then possibly the most unique habitat on earth will be lost," he said on the sidelines of the pope's speech.

Francis met later Saturday with nuns and the island nation's bishops before presiding over an evening vigil attended by an estimated 100,000 young people.

Dancers who performed for the 82-year-old pope mobbed him on stage after the vigil ended, evidence of his rock-star popularity in a country where some 35 percent of the population is Catholic.

"I'm very happy to get a chance to see the pope because I have only seen him on my phone," said Raspanambinina, 32, who attended the vigil with her three children. "This time is very important for me and family as it's the first time he has come here."

In his off-the-cuff remarks to a group of giggling nuns earlier in the day, the first Jesuit pope gave them advice about living in religious communities. He told them to speak up when there are problems and acknowledged that superiors can sometimes be the source of them.

"Not all prioresses are Nobel Prize winners for niceness," he quipped. (AP)