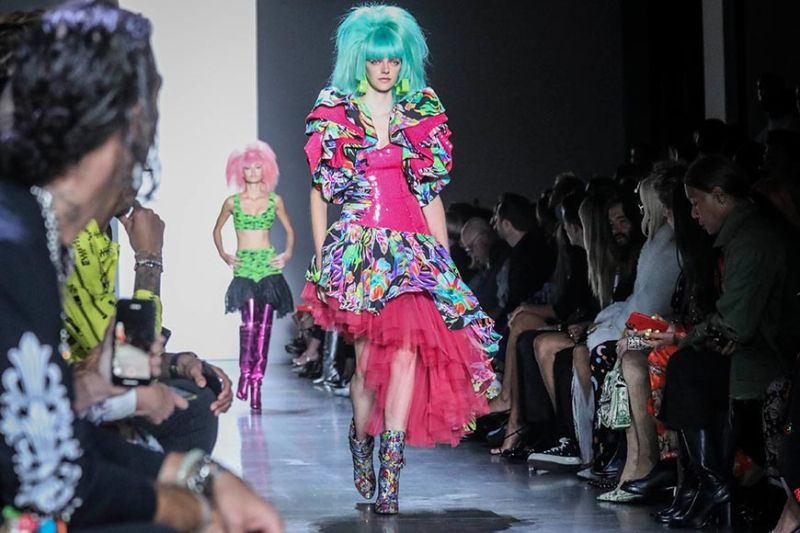 Along with the futuristic sparkle, Friday evening's show, September 6, had some more earthly designs like pretty prints, fringes and lace, and even some down-to-earth denim.

But the show, in front of notables like supermodels Gigi Hadid and Irina Shayk, was mostly about color (the bold, neon variety) and sparkle, aided by over 30,000 crystals embedded in the garments.

And the look was carried, literally, from head to toe. A memorable highlight was the wigs, poufy creations with bangs, in shades of pink, yellow, orange, turquoise, and deep blue. Another was the tall, shimmering, over-the-thigh boots in everything from metallic silver to purple, to bronze, to green, to ice blue.

Scott said after the show that he'd been inspired to create "an intergalactic imaginary synthetic pop band, a rock opera in outer space."

But the idea, specific as it was, was not triggered by any particular experience, either musical or visual, Scott said.

"Creativity is such an obtuse thing, you know," the designer said in a backstage interview.

"I don't really know how all these ideas come to me, I just try to keep myself really open...like a vessel, to receive these inspirations. I just feel them and don't try to dissect why I am feeling colorful, or not colorful, or bold, or...well, I'm always bold," Scott said. "But as for something versus another, I just try to feel it, go with it, (be) open, embrace it and let it come in and follow the process."

It was almost, Scott said, "like breadcrumbs are being left by a higher divinity." (AP)