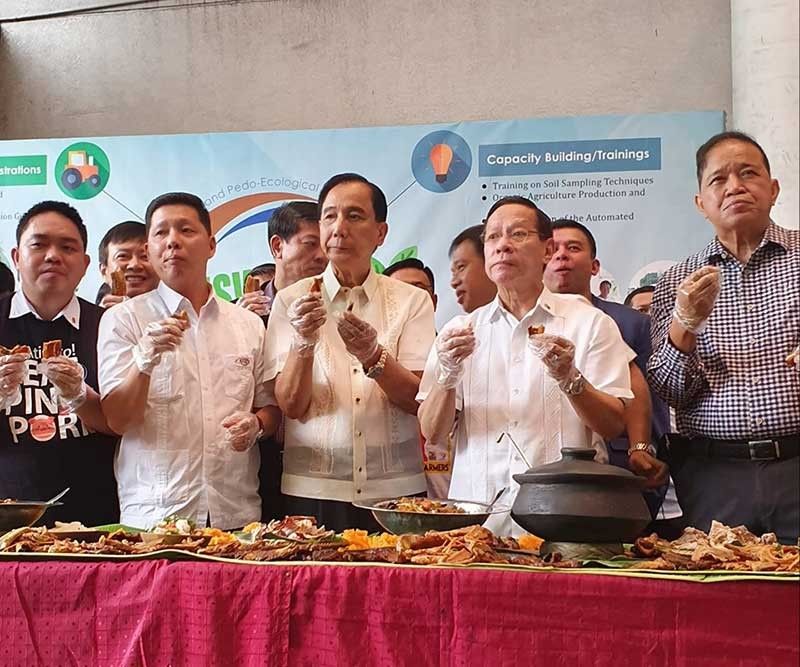 MANILA. Agriculture Secretary William Dar, center, participate in a boodle fight with private and commercial hog raisers to show that pork and pork-based products are safe to eat. (Photo from William Dar Facebook)

THE Department of Agriculture (DA) has confirmed cases of African swine fever in the Philippines, but Malacañang and Agriculture officials said the public should not be alarmed and that pork is safe to eat.

Panelo issued the statement just hours after the DA confirmed that at least 14 of 20 blood samples from sick hogs that were sent to United Kingdom tested positive of African swine fever.

"We are prepared to respond to all scenarios. We assure the public there is enough supply of pork in the market," Dar stated.

He said the DA has suspended the ground operations in Rizal province and they will now focus on cleaning and disinfection operations.

"However, we will remain vigilant and continue to vigorously conduct surveillance and quarantine measures," he added.

Dar said that "although the disease does not pose any hazard or risk to humans, it is very infectious among pigs, and can easily spread from one farm to another if not properly managed."

The disease earlier killed scores of hogs in Rodrigues and Antipolo in Rizal, and Guiginto in Bulacan.

At least 7,416 hogs within the one-kilometer radius of the affected areas in Rizal and Bulacan provinces have already been culled.

All affected areas have already been "cleared" of the disease, the Agriculture chief said.

To swine raisers, he urged them to enhance biosecurity measures, promptly report to the DA any unusual animal mortalities abd avoid swill feeding.

To date, Panelo said it is still safe to eat pork.

"I think there is no need to worry considering that the DA secretary has not cautioned us not to avoid or not to eat, or to avoid. Wala pa namang directive (There is no directive yet)," he said.

"For consumers, we advise them to remain vigilant when buying meat and meat products, and always look for the 'NMIS' seal as a guarantee," Dar added. (Ruth Abbey Gita/SunStar Philippines)