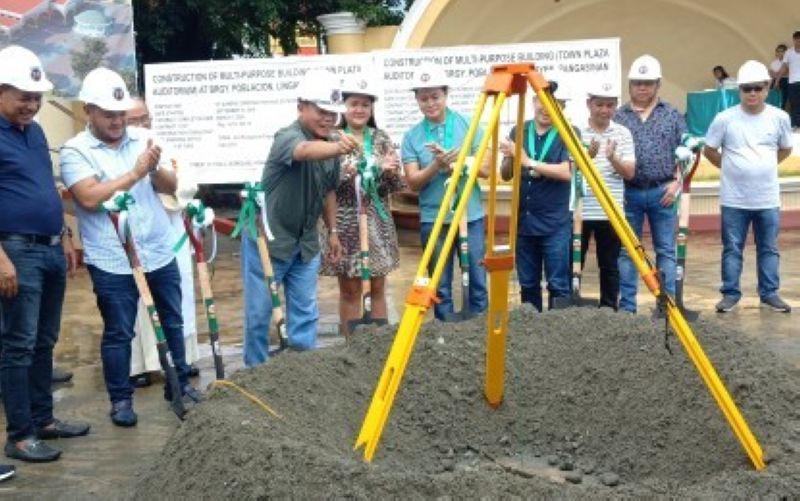 PANGASINAN. Lingayen Mayor Leopoldo Bataoil (third from left) lowers the time capsule for the planned town plaza auditorium that marks the start of construction for the project on Saturday (September 7, 2019) at Barangay Poblacion Lingayen Pangasinan. The groundbreaking ceremony was attended by other provincial officials. (PNA photo by Hilda Austria)

“I am glad the funds have been retained for the project. This is a dream come true for Lingayen,” Mayor Leopoldo Bataoil said in an interview.

He said the funding came from the General Appropriations Act of 2019, with allocations made by the Local Infrastructure Program of the Office of the 2nd district representative of Pangasinan, Manila Teachers party-list, Buhay party-list, and the Senate.

“Hopefully, we could add more funding for the next phase of the project wherein we hope to build an auditorium with a basketball court with the Philippine Basketball Association standard and could accommodate thousands of people,” Bataoil added.

He added that they are also looking for funds for the town’s municipal amusement park.

“We wanted Lingayen to have a facelift since it is the province’s capital,” Bataoil said.

The construction of the town plaza auditorium will begin on Sept. 10 and the Department of Public Works and Highways Pangasinan second engineering district, being the implementing agency targets, will finish the project by the first quarter of 2020 or earlier.

“Hoping it will be completed by Dec.31 this year before the town fiesta. They will do overtime work here,” Bataoil said. (PNA)