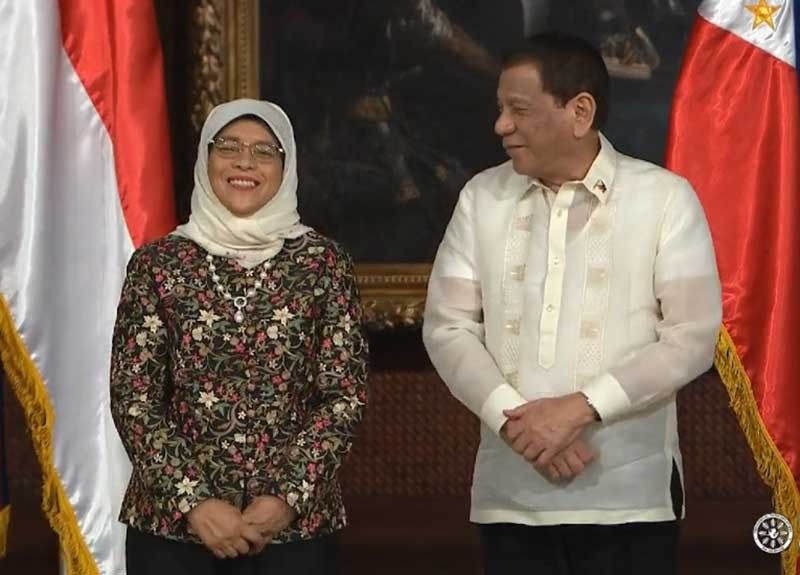 AT LEAST eight agreements were signed between Manila and Singapore on Monday, September 9, during the five-day state visit of Singaporean President Halimah Yacob to the Philippines.

Halimah and President Rodrigo Duterte witnessed the signing of eight memoranda of understanding (MOU) on the sidelines of their bilateral meeting.

An MOU was inked between the Department of Education and Temasek Foundation International and Nanyang Polytechnic International Programme on innovations and teaching and learning of science, technology, engineering and mathematics (STEM) with Design Thinking.

The Department of Agriculture also signed an MOU with Enterprise Singapore on agricultural cooperation and related activities.

Another MOU on cooperation on human capital development and rescaling and skills upgrading of workforce was inked among the Department of Trade and Industry, the Technical Education and Skills Development Authority, and Skills Future Singapore Agency.

The Development Bank of the Philippines and Infrastructure Asia Singapore also inked an MOU on knowledge sharing to support infrastructure development.

There was also an MOU between Metropolitan Waterworks and Sewerage System and Public Utilities Board.

The National Commission for Culture and the Arts also entered into an agreement with the Ministry of Culture, Community, and Youth through an MOU on cultural cooperation.

An MOU that seeks to assist Philippine local implementing agencies in developing or implementing public-private projects was inked between Infrastructure Asia and Public-Private Partnership Center.

The last MOU was signed between the National Privacy Commission and The Personal Data Protection Commission to boost cooperation in personal data protection.

In a joint press statement with Halimah, Duterte expressed gratitude for the two countries' "special relationship."

The President made the remark as he recognized Singapore as the Philippines' "second highest source of investments" in 2018, committing a total of P21.18 billion or 11.8 percent of Manila's total foreign pledges.

He also noted that Singapore is the Philippines's seventh largest trading partner with two-way trade at $10.49 billion.

"With the agreements signed today, we take the first of our eager steps toward the next half-century of our natural, mutually reinforcing and beneficial partnership," Duterte said.

"With mutual trust, respect, and abiding amity, I am confident that we will achieve our shared goals and aspirations for our peoples. We will forge ahead and bring our ties to even greater heights of [purposive] cooperation and friendship between the Philippines and Singapore," he added.

For Halimah, the close collaboration between the two nations has yielded "fruitful partnerships."

The Singaporean leader was also optimistic that the next chapter of the Philippines and Singapore's relations would be marked by "deeper friendships and closer collaboration" between their peoples.

"The economic ties between our two countries are strong and robust, but President Duterte and I agreed that we can do even more together. There is room to further boost trade and investment flows," she said. (SunStar Philippines)