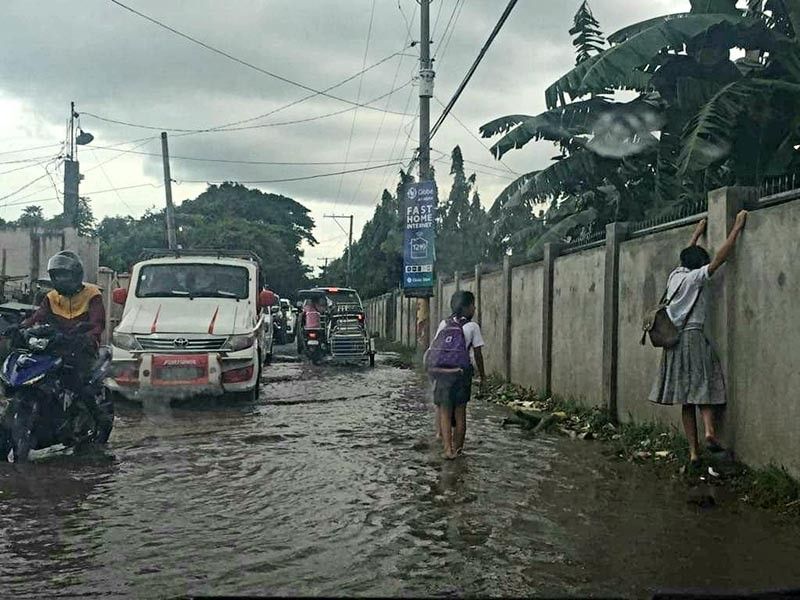 PAMPANGA. A student in San Simon town tries to avoid being dipped in stagnant floodwaters while on her way to school. (Princess Clea Arcellaz)

AT LEAST 33 villages in Pampanga province were reportedly flooded as of Monday noon, September 9, due to heavy downpour brought about by the southwest monsoon affecting central and northern Luzon.

Based on a report sent by Provincial Disaster Risk Reduction and Management Officer (PDRRMO) Angie Blanco to Governor Dennis Pineda, the flooded barangays are located in the coastal and low-lying towns of San Simon, Macabebe and Masantol.

In particular, portions of the five barangays in San Simon, seven in Macabebe and 22 in Masantol were experiencing flooding of up to three feet, the situational report added.

Meanwhile, classes in all levels in both private and public schools in Guagua, Sasmuan and Floridablanca, while classes from pre-school and senior high school in San Luis and Lubao were suspended due to bad weather condition.

The PDRRM Office's Disaster Response, including its manpower and equipment, will remain activated and prepositioned to ensure the quick response to possible victims in case of unfortunate incidents.

All local DRRM in the cities and municipalities in the province are also instructed to conduct continuous monitoring of the overall situation in their respective areas.