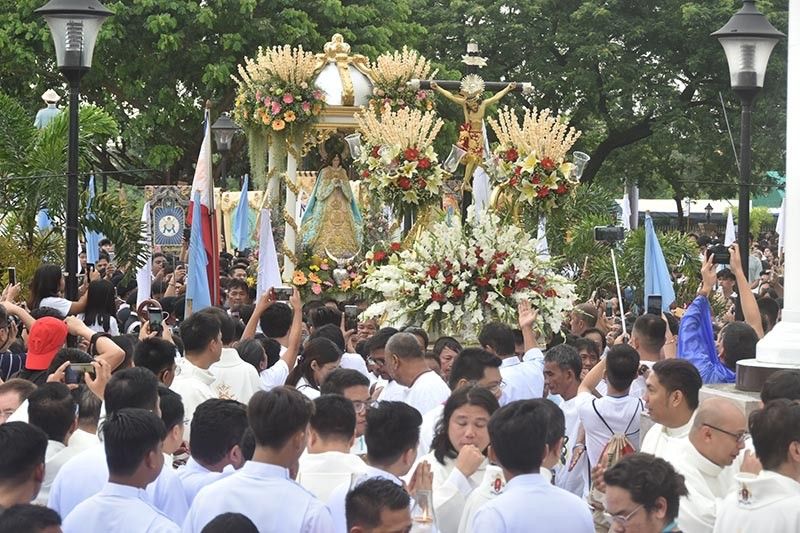 PAMPANGA. Thousands of devotees flock to the Provincial Capitol grounds to witness the celebration of the 63rd Canonical Coronation of Virgen Delos Remedios on Sunday, September 8, 2019. (Pampanga PIO)

THE dreary weather and rains failed to dampen the faith of hundreds of Kapampangans, as they trooped to the Metropolitan Cathedral of San Fernando and later to the Capitol grounds for the liturgical services and the reenactment of the canonical coronation of Pampanga's beloved patroness -- Virgen delos Remedios.

The reenactment rite is held every September 8, which is also the Feast of the Nativity of the Virgin Mary, a national holiday in the Philippines and observed by Catholics and Marian devotees with devotional activities.

Devotees from all over Pampanga gathered as early as 1 p.m. Sunday, September 8, at the Provincial Capitol of Pampanga for the 63rd canonical coronation anniversary.

The procession rites stated at 3 p.m. from the Metropolitan Cathedral of San Fernando to the Pampanga Capitol grounds where the first canonical coronation was held some 63 years ago. The highlight of the celebration was the Holy Mass followed by the re-enactment of the coronation rites at 3:30 p.m.

Rains fell on the crowd several times during the Thanksgiving Mass.

Pampanga Archbishop Florentino Lavarias highlighted the role of the youth in the Christian Church during his homily. He said the youth should look at the Blessed Virgin as their role model to continue Christ's mission to the people.

"We, the older generation should support the youth. Let us make them feel that they have been bestowed grace by God. The youth are beloved," Lavarias said.

The images of the Santo Cristo del Perdon and the Virgen delos Remedios were brought back to the chapel of the Arzobispado after the event.

Devotion to Virgen Delos Remedios began in France and popularized by St. John Matha, who prayed to the Blessed Mother in his efforts to free slaves. Then it became popular in Spain, where she became the patroness of different crusades against Muslims. With time, her title changed by the places where she is enshrined, as the Nuestra Señora de Caridad in Cuba.

Through the galleon trades, the devotion was brought to Manila, where the oldest Marian image of the Nuestra Señora delos Remedios is enshrined at Malate Church. At present, there are 17 churches listed in the Philippines dedicated to Nuestra Señora de los Remedios. The most popular devotion is Pampanga's Crusade of Charity and Penance, which was entrusted under the patronage of Virgen de los Remedios and initiated by Bishop Cesar Maria Guerrero, who incidentally is from Malate.

With the devastation of World War II, Pampanga became a center for communism and breeding ground of socialism. There was a huge gap between rich and poor, thus peasants and farmers were up in arms against their landowners.

Thus in 1952, Bishop Guerrero set the image of Nuestra Señora de los Remedios to visit every church and chapel around the diocese that brought together the faithful in prayer with non-stop recitation of the rosary. There were daily Masses and the faithful were encouraged to return to the sacraments. Likewise, care for the poor was emphasized where aid was solicited by the host parish and brought to the needy of the next parish. In between prayers and devotions, folks were working and sharing together for peace.

As recognition of Kapampangan's enthusiastic and deep devotion to Mary, Pope Pius XII bestowed the Canonical Crown on September 8, 1956.