Editorial: Celebrate, by all means 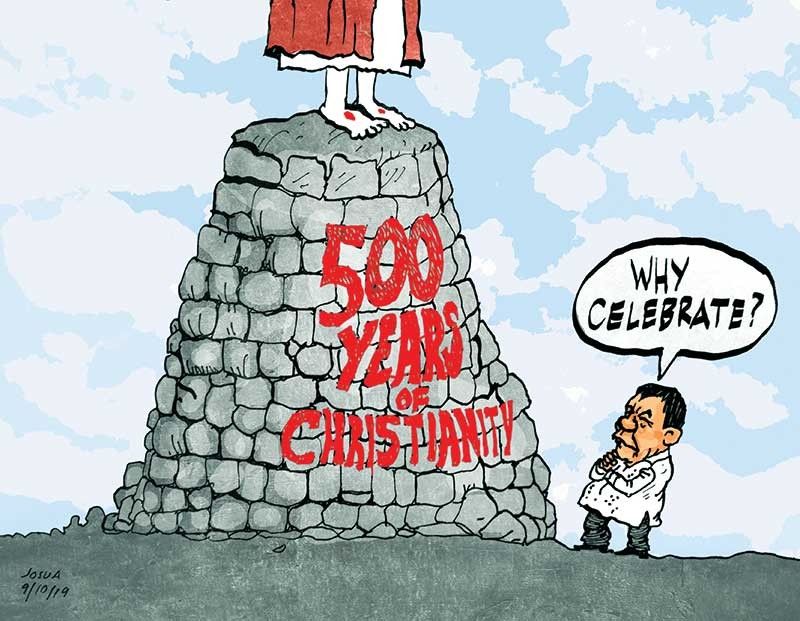 FAITH, unfortunately for politicians, is much more personal than their promise of change. President Rodrigo Duterte, in a speech last Sept. 6 in Naga City, said there is no need to celebrate the arrival of Christianity 500 years ago on our shores, hurling yet again another tirade on the Catholic Church. Two days later, close to 9,000 Marian devotees trooped to the “Walk with Mary 2019” in Cebu City. No direct connection there, but it shows just how even this popular leader’s word hardly makes a dent on the Filipino’s robust faith.

The Catholic Bishops Conference of the Philippines (CBCP) has been preparing for the Jubilee Year in 2021 to mark the 500th anniversary of the arrival of Christianity on Philippine shores.

For over three years now, Duterte had been using the executive platform to attack the old monolith, trying to chip away at its strength by attacking religious leaders critical of him.

This time, he emphasizes Christianity as a remnant of the country’s painful period of colonization.

“You know, they came to this country as imperialists. We are not Spanish and they subjugated us for 300 years. That’s painful for me... And yet I was asked for a commemoration for the 500 years since they arrived here,” the President said.

“When Magellan arrived here, he brought with him cannons and a cross, so we became Christians. We didn’t have a religion back then. But because they brought the cross, religion, cannons and guns, the natives yielded. They were scared,” he added.

While centuries of Spanish occupation and Catholicism gave the Filipinos a nagging feeling of whether it had done them more good than bad, or vice-versa, the ambivalence itself describes the very culture we have. The Filipinos exemplify an East-West fusion not quite pronounced in other parts in this side of Asia. We have religious feasts all-year round, take fashion, architecture, visual arts, songs, rites etc. Lightning strikes, and there flies the sign of the cross, “Hesusmaryosep!”

History so hardwired Christianity into the Filipino psyche that even a good number of executive diatribes can’t reverse. It’s almost like the Filipino’s default setting—this moral compass that it had become.

So, yes, that’s one of Christianity’s best gifts—a moral compass. Certainly, we too had that time when religion stopped cannons and guns and the Filipinos overcoming their fear, remember Edsa. You have a country that turns to prayers when the state of the nation seems incomprehensible. We know deeply just how wrong killing one’s neighbor is. That, despite the popular consent a bulk of the populace bestowed on the government’s bloody drug war.

The CBCP is right, 2021 will be a celebration of faith and human victory—a fitting emphasis in a time of convoluted morals.