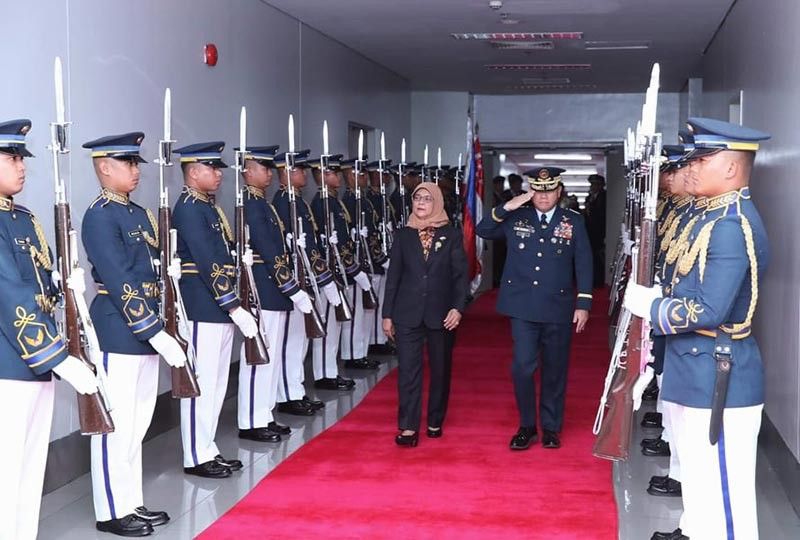 SINGAPORE President Halimah Yacob will be the third head of state to visit Davao City when she arrives in the city on Wednesday, September 11, 2019.

Yacob, Singapore's first female president, is set to participate and engage in a dialogue with the youth organized by the Al Qalam Institute for Islamic Identities and Dialogue in Southeast Asia at the Ateneo de Davao University.

Lidasan said among the topics to be discussed are the salient provisions of the Document on Human Fraternity for World Peace and Living Together, the Mindanao Youth Leaders in Inter-faith Dialogue, and improving the Philippines-Singapore Relations.

"The dialogue will give lessons learned on both sides, Singapore and Philippines, in terms of interreligious dialogue," he said.

"President Halima symbolizes a strong Muslim woman. She can inspire our youth today to work peace and development and good governance through inter religious dialogue and unity of all faiths as written in the Human Fraternity document," he added.

Lidasan also said Halima's visit is very significant as she can inspire the youth in preventing, countering, and transforming-violent extremism.

"Singapore and Davao has similar strong leaders. Strong political will is needed," he said.

Meanwhile, Yacob will also be visiting the Philippine Eagle Foundation (PEF) Center in Malagos, wherein Singapore is host to a pair of Philippines Eagles that arrived in June 2019 under a 10-year breeding loan agreement.

PEF executive director Dennis Salvador told SunStar Davao that it will be the center's first visit of a foreign head of state.

"We're honored that the Singaporean President visit the center. We've never been visited by a seating president here in the country," Salvador said in a phone interview.

He hopes the visit would further strengthen the partnership between the two countries in preserving the Philippine eagle.

"This being a national icon, the practical benefits of protecting forest, not only for wildlife but also human communities that depend on our forest to survive and mitigate the changes of our climate," Salvador said.

According to the Singapore Ministry of Foreign Affairs, Davao City Mayor Sara Duterte-Carpio will be hosting a dinner for the Singaporean President.

Security will be tight with the visit of Yacub, as some 1,000 security forces will be deployed during her visit in Davao City.

DCPO Director Alexander Tagum assured that they have beefed up their security measures in coordination with other security forces and law enforcement agencies to secure the visit of Yacob.

"We'll be implementing a high level of Security protective coverage to the visiting foreign dignitary based on the Asean (Association of Southeast Asian Nations) Security Template that will be closely monitored and supervised by PRO 11's Tactical Operation Center (TOC) and the City's PSSCC," Tagum said.

Tagum added that it would be a multi-level security that will start with Yacob's arrival at Davao International Airport (DIA) going to her hotel as well as the official venues of engagements and then her departure back to Singapore.

"We'll be in full control and therefore a lot of security forces will be deployed for said top-level security requirement," Tagum added.

Yacob is the third head of state to set foot in the city since then Davao City mayor Rodrigo Duterte became president.

Her visit to Davao City is part of her official visit to the Philippines to commemorate the 50th anniversary of the establishment of diplomatic relations between Singapore and the Philippines.

Japanese Prime Minister Shinzo Abe visited Davao City in January 2017 during his state visit to the Philippines, while Indonesian President Joko Widodo was in Davao City in April 2017 for the launching of the Davao-General Santos-Bitung shipping route.