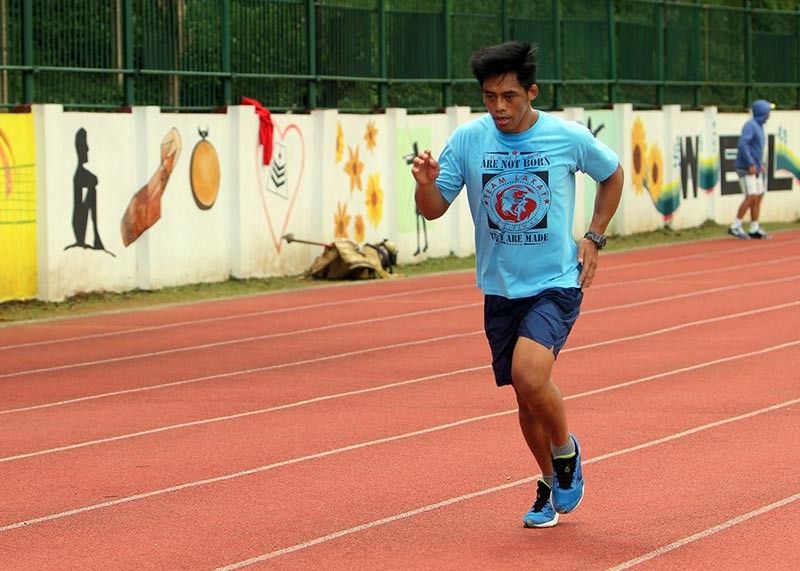 BAGUIO. Honorio Banario gets his cardio work out at the Baguio Athletic Bowl track oval as he gears up against Shinya Aoki. (Photo by Roderick Osis)

Banario, the former featherweight world champion, is set to lock horns with Shinya Aoki on October 13 for One Championship’s 100th event dubbed “ONE: Century” in Tokyo, Japan.

“I’m focusing on my explosiveness because I think it’s the one lacking so I’m working on including my timing and game plan,” said Banario.

Banario acknowledged he will be going up against the game’s best grappler.

Aside from regular sprints as part of their cardio build-up, Banario said he is tripling his effort in training including takedown defense.

Banario added he is keen on bouncing back after a lackluster performance in his last fight in Manila where he yielded a unanimous decision loss against Dae Sung Park.

He believes his willingness to get his hands dirty in his childhood shaped him into the competitor he is today.

Living in the Philippines’ Benguet province had its perks, it also presented challenges in everyday life.

“As far as I remember, my childhood was very interesting in the sense that it’s very enjoyable to stay in the province. You can do whatever you want, and you got to play and go to school,” he said.

The 29-year-old’s parents were farmers – the main livelihood of most of the people in their province – and almost every household planted vegetables in their own backyards to feed themselves, too.

It was natural for the young Banario to get involved in the family trade to help his make ends meet.

Banario’s aptitude for hard work has been a tremendous asset during his martial arts career. By the time he started to train, he was used to long periods of physical exertion, so he could adapt to intense training sessions.

He is also no stranger to having to dig deep to make it through long, drawn-out battles, like in his wins against Adrian Pang and Rahul Raju, or his fourth-round TKO of Eric Kelly to win the inaugural ONE featherweight world title.