Delayed drainage projects in Mambaling 'cause of flooding' in area 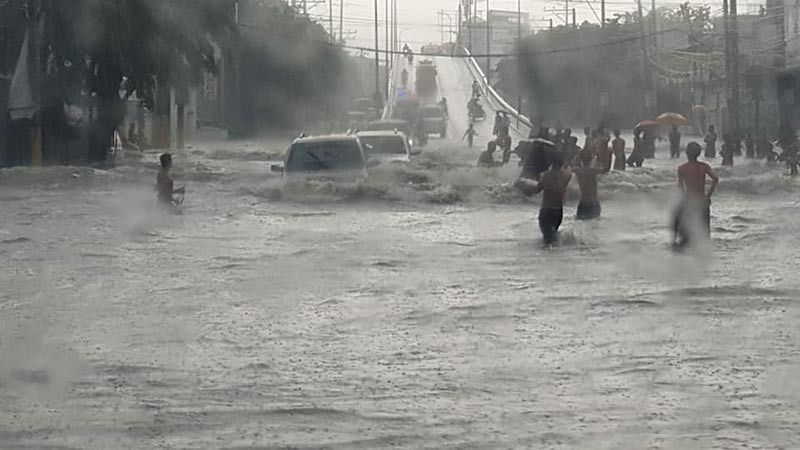 CONSEQUENCE. Residents near the Mambaling underpass claim that flooding has worsened since the tunnel was built. (Contributed Photo / Lelibel Jala Ochea )

THE P15-million road-widening project that includes a drainage system should have been implemented before construction of the Mambaling underpass started.

If that had been the case, flooding in the area might have been avoided, said underpass project engineer Roy dela Cruz of the Department of Public Works and Highways (DPWH) 7.

Heavy rains brought about by tropical storm Liwayway flooded parts of Metro Cebu, including the vicinity of the Mambaling underpass in Cebu City, on Sept. 1, 2019.

Several netizens posted photos on social media showing waist-deep waters in the barangay. They said flooding in the area had gotten worse since the underpass was built.

“Supposed to be, we have a project for the widening to include the drainage system there, but there was a failure in bidding. So we just proceeded with the construction of the underpass,” said dela Cruz.

Another project worth P18 million will also be used to improve the drainage system perpendicular to the underpass in the area near Shopwise. It will carry rainwater to Tagunol St. in Barangay Basak Pardo.

Dela Cruz said the two projects were delayed because of road right-of-way (ROW) concerns, adding that the bidding for the P15 million project was declared a failure after the ROW concerns were not solved.

“The ROW should be given importance because that still has to undergo expropriations, which take time,” he said.

Based on their experience, “the result was not good” if the construction started without settling ROW concerns first, he said, adding that work on improving the drainage system must be continuous.

As for flooding in the area, he said water inundates the roads on either side of the tunnel but it doesn’t flood the tunnel itself.

The project engineer said pumps are installed in the underpass that automatically turn on if the water reaches a certain level.

He said the agency and the Cebu City Department of Engineering and Public Works (DEPW) have been declogging 30 manholes in the area as a temporary solution to the flooding problem.

He said it takes them up to two days to clean one manhole, usually collecting around 50 sacks of garbage in each manhole.

DEPW head Kenneth Carmelita Enriquez, for her part, said they have not received any complaints from barangays affected by the flooding.

But Mambaling Barangay Captain Gines Abellana pointed to an “unfinished” drainage project in the area, which causes flooding.

Abellana said they had been requesting the DPWH 7 to address the problem since last year, adding that he is glad the City plans to review all drainage systems in the city.

He said they had been conducting cleanup operations every Saturday to minimize flooding in the barangay.

He said they had also been apprehending residents who violated environmental laws.

The construction of the P700 million Mambaling underpass started in 2017. It was opened to motorists last June 15. It was built to decongest traffic at the intersection of N. Bacalso Ave. and F. Llamas St. JJL