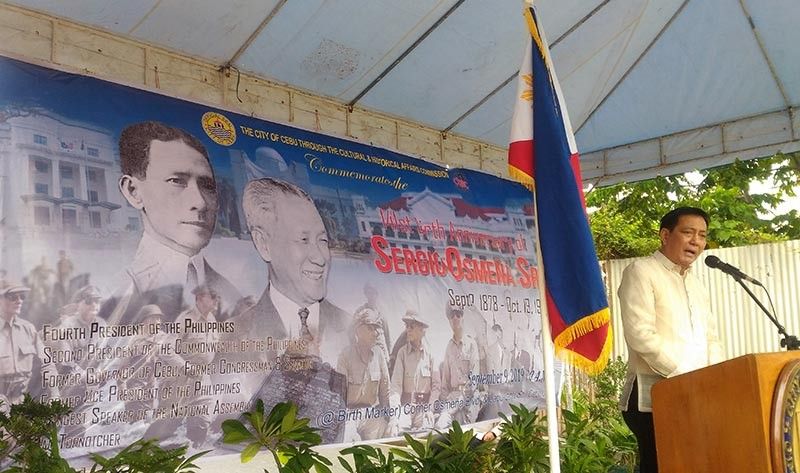 ALL employees of the Cebu City Government should not only attend official City Hall activities like the celebration of Don Sergio Osmeña Day on Monday, Sept. 9, 2019, but they should also stay for the entire event.

Vice Mayor Michael Rama, chairman of the committee on historical affairs commission, said he plans to bring the matter up with Mayor Edgardo Labella.

Rama, who is acting mayor while Labella is in Xiamen, China for an official trip, said many people attended last Monday’s mass that kicked off activities lined up for the “Grand Old Man of Cebu.” But as the mass progressed and even before the program could start, they started to leave, he said.

“I will bring this up to the mayor because that is what I have been noticing. Maglumba na sila og (they race to sign the) attendance (sheet). It has to be that way. If you want to give meaning to an occasion, from the beginning up to the end you should be there,” Rama said.

Meanwhile, the vice mayor assured that Don Sergio’s marker at the corner of Lapu-Lapu St. and Osmeña Blvd. would not be affected by a building project that would rise behind it.

Rama said the marker deserves to be preserved, considering Don Sergio’s contributions not only to Cebu but also to the rest of the country when he became the second president of the Philippine Commonwealth after the death of Manuel Quezon.

Rama has launched a new advocacy that he calls “Gising Pilipinas (Wake up, Philippines), wherein he wants to promote good manners and right conduct in the name of Don Sergio. He also wants the media to focus on news about progress and rehabilitation instead of reporting on the number of drug suspects killed or how many millions or billions of pesos worth of illegal drugs have been confiscated.

Rama also wants less corruption in the Cebu City Government, pointing out that Don Sergio’s name was never embroiled in corruption during the latter’s 40 years of public service. (From PAC of Superbalita Cebu/PJB)