Cebu ups vigilance against ASF after 7,400 pigs culled in Luzon 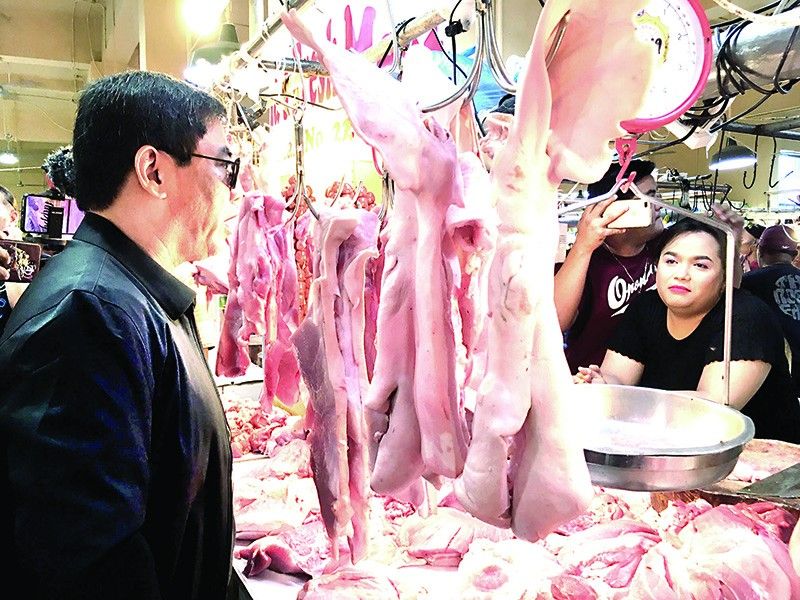 NO ENTRY. In this July 2019 photo, Lapu-Lapu City Mayor Junard Chan inspects the city’s public market. Following confirmation that African swine fever (ASF) has hit hogs in Luzon, Cebu’s ASF task force and pork producers will double their efforts to prevent the entry of the virus into the province. (SunStar Photo / Alan Tangcawan)

THERE is no reported case of African swine fever (ASF) in Cebu, but the Provincial Government and other agencies are doubling their efforts to prevent the spread of the disease.

For Department of Agriculture (DA) 7 Director Salvador Diputado, as long as seaports and airports continue to tighten their security measures, hogs in Cebu will be kept safe from the deadly virus.

“So far, to this very minute, there are no reported incidents in Central Visayas that are similar to the incidents in Rizal,” Diputado said on Monday, Sept. 9, 2019.

According to DA-Crisis Management Team Bulletin 5 issued on Monday, the confirmatory Polymerase Chain Reaction test rendered positive results for ASF. The DA, though, has yet to receive the viral isolation test from the United Kingdom.

“Rest assured that the DA is on top of the situation. We are prepared to respond to all scenarios. We assure the public there is enough supply of pork in the market. We are pleased to report that we have already suspended the ground operations in Rizal and will now focus on cleaning and disinfection operations. However, we will remain vigilant and continue to vigorously conduct surveillance and quarantine measures,” the bulletin read.

ABS-CBN News reported on Monday that some 7,416 pigs within the one-kilometer radius of affected areas in parts of Rizal and Bulacan provinces had been culled.

Despite Dar’s pronouncement, the Provincial Government is not letting its guard down.

“We must now double our efforts at vigilance against the entry of pork and pork-related products this time, not just from ASF-stricken countries, but also from within the Philippines. EOs (Executive Order) 13, 13-A and 14 shall remain strictly enforced,” said Cebu Gov. Gwendolyn Garcia.

The governor issued EO 14 on Aug. 22, prohibiting the entry of pork, pork-related products and byproducts into Cebu Province without permits or certificates for 100 calendar days.

EO 14 also regulates the entry of live hogs through all ports in the province for 100 days as well.

It augments EO 13 issued on Aug. 20, which adopted an ASF provincial preparedness and contingency plan and created a task force.

Through the implementation of the temporary ban, around 100 live hogs that arrived in Cebu were shipped back to Masbate on Aug. 26, after members of the task force found that their transport permits had been tampered with.

Around 90 kilos of frozen pork and cans of Chinese luncheon meat worth over P470,000 were also disposed of by the task force through thermal destruction at the RRDS Petro Chemical Industries in Barangay Umapad, Mandaue City.

The pork products came from countries such as China and Vietnam that are reportedly infected by the ASF.

For his part, Diputado said the Capitol’s temporary ban would be an effective preventive measure against the spread of ASF.

“But we have to look at first the progress if it will not have any adverse effect on the hog industry. The point here is that it’s important to keep the ASF virus from entering the region, especially in Cebu. Cebu is the top producer of swine in the region and the fourth largest hog producer in the country. That’s why it’s important to strictly watch out for the entry of hogs (coming from outside the province). We don’t have problems with our local swine,” he added.

Cebu’s volume of production is placed at 4.33 percent, contributing some P10.98 billion to the country’s agriculture industry every year.

However, the province’s annual pork production is only 53 million kilos, meaning it has to import pork from other sources to cater to the demand.

Part of the QRTs’ tasks is to coordinate with local government units and ensure the strict implementation of the DA’s biotech protocol.

The biotech protocol encourages swine raisers to observe deaths among their hogs.

Instead of burying the dead hogs, swine raisers are advised to report cases of pig mortality to their local agriculture or veterinary office immediately.

Diputado said doing so will help the DA identify the cause of deaths faster, preventing similar incidents from affecting other hogs.

He also urged hog raisers not to keep mum about unusual occurrences in their pig farms.

Aside from this, swine raisers are also advised to avoid swill feeding, or feeding their pigs food scraps.

“Swill feeds are usually composed of scraps of spoiled food from hotels and restaurants. It was pinpointed as one of the causes of the infection in Rizal. That is why we’re highly discouraging raisers from feeding their pigs with swill. Feed them pig feeds or freshly cooked food instead,” Diputado said.

The biotech protocol also pushes for the maintenance of cleanliness and sanitation in piggeries.

Diputado said poor sanitation practices are huge factors in the spread of diseases.

Consumers are also advised to remain vigilant when buying meat and meat products and always look for the “National Meat Inspection Service” seal as a guarantee.

Although the disease does not pose any hazard or risk to humans, it is very infectious to pigs.

The Philippine College of Swine Practitioners has defined ASF as a contagious viral disease, which exclusively infects pigs and wild boars.

The progression of the transboundary disease is rapid and upon infection, can progress within three to 14 days.

ASF exhibits similar signs to other hemorrhagic diseases, but in contrast to pigs with hog cholera, those infected by the ASF do not develop conjunctivitis.

Pigs infected with less virulent isolates can transmit the virus to susceptible hogs for as long as one month after infection since the blood could be infectious for up to six weeks.

Transmission can occur through feeding on infected pork or carcasses, contamination of equipment and when blood is shed.

The disease has a mortality rate of up to 100 percent and can affect all pig age groups. There is neither a vaccine nor an effective treatment yet.

The Central Visayas Pork Producers Cooperative (CeViPPco) has mobilized almost 100 personnel to conduct monitoring and information awareness among hog raisers in the region to combat the ASF virus.

“We have been supporting the government, especially quarantine officers in the airports and seaports. We are also printing around 100,000 flyers and have been conducting ASF awareness seminars to pig farmers,” he said.

Here in Cebu, Tambago said they would strictly implement the enforcement in line with the administrative orders issued by Governor Garcia.

In the absence of those documents, the pork will not be allowed to enter Cebu, he said.

Tambago said the private sector is constantly coordinating with the government to fight the entry of ASF.

“We have almost 100 people mobilizing for different teams that focus on seaports and airports. Another team for education and information and another for the wet market and supermarket,” he said.

Felix Tiukinhoy, president of the Philippine Association of Meat Importers Inc., said they are waiting for the joint guidelines of the DA, Department of the Interior and Local Government and the Department of Health. JOB