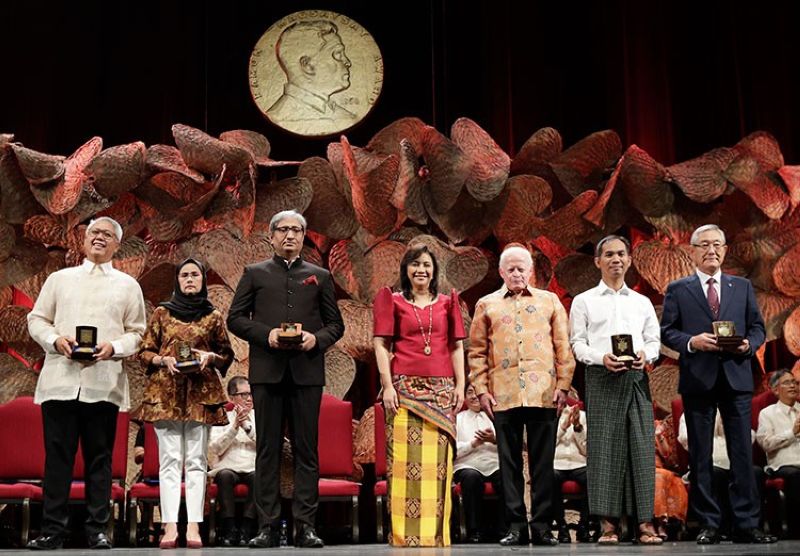 MANILA -- Five people were honored Monday, September 9, as this year's winners of the Ramon Magsaysay Awards, regarded as Asia's version of the Nobel Prize, including a South Korean who helped fight suicide and bullying and a Thai housewife who became a human rights defender after losing her husband to violence in southern Thailand.

The others who received the prize at a Manila ceremony were two journalists from India and Myanmar who advocated independent, ethical and socially relevant journalism and a popular Filipino musician credited with helping to shape modern Philippine musical culture.

The awards are named after a Philippine president who died in a 1957 plane crash. That year, a foundation was established to give out the annual awards to honor "greatness of spirit in selfless service to the peoples of Asia."

After losing his 16-year-old son to suicide due to bullying in school in 1995, Kim Jong-ki changed from being a successful business executive to a crusader who has worked for more than two decades to fight school and youth violence in South Korea, which has one of the world's highest suicide rates.

The year his son died, Kim established the Foundation for Preventing Youth Violence, which developed a program to help detect, protect and manage youth violence and campaigned widely against bullying. The foundation operated a hotline, which now receives 30 to 50 calls daily, developed the capacity to dispatch staff to respond to emergencies and lobbied for needed government policies and legislation, the Ramon Magsaysay foundation said.

A 2018 survey showed that since Kim's foundation launched its campaign in 1995, incidents of school violence have dropped, the awards body said, adding it recognized his "quiet courage in transforming private grief into a mission to protect Korea's youth from the scourge of bullying and violence."

"I am very proud of this achievement, the work that started from my personal sorrow finally made a difference in the Korean educational system and society," Kim said.

Thai housewife Angkhana Neelapaijit won the Magsaysay award for "her unwavering courage in seeking justice for her husband and many other victims of violence and conflict in southern Thailand," the Magsaysay awards foundation said, adding "her systematic, unflagging work to reform a flawed and unfair legal system, and the shining proof she is that the humblest ordinary person can achieve national impact in deterring human rights abuses."

Angkhana was a housewife tending to her five children and a small business when her husband, a human rights lawyer, was abducted in 2004 in Bangkok after publicly accusing the Thai military of torturing detainees in the predominantly Buddhist country's south, scene of decades-old religious and ethnic conflicts, the foundation said.

Despite death threats, she sought justice for her husband and other human rights victims. She founded in 2006 the Justice for Peace Foundation, which documented human rights conditions in southern Thailand, raising public awareness and creating pressure on the government to act on rights violations.

Her foundation and other groups lobbied and succeeded in helping prod the Thai government to sign and ratify the United Nations Convention Against Torture in 2007, and the Convention to Protect All Persons from Enforced Disappearance in 2012, according to the foundation.

Journalists Ravish Kumar from India and Ko Swe Win from Myanmar confronted threats and stood up for truth, integrity and independence to be able to practice journalism of the highest standard in their countries, the foundation said.

One of India's most influential TV journalists, Kumar has advocated for sober, balanced and fact-based reporting "in a media environment threatened by an interventionist state, toxic with jingoist partisans, trolls and purveyors of fake news," the foundation said.

"While I am happy for myself today, I am also filled with sadness looking at the state of the profession I represent," Kumar said. "Indian media is in a state of crisis and this crisis is not accidental or random but systemic and structural."

Ko Swe Win was a student who was detained in 1998 for seven years for helping fight Myanmar's former ruling junta before he became a journalist. Since 2016, he has been the editor-in-chief of Myanmar Now, an independent news outfit that "has built a strong reputation for well-researched, in-depth articles on critically selected, under-reported human rights and social justice issues," the awards foundation said.

Ryan Cayabyab, the son of a government employee and a Filipina opera singer, made huge contributions as a composer, arranger, music director, conductor, performer, and educator for more than 40 years, it said. He played a role in a movement "to promote a culturally distinct, contemporary Filipino popular music" is "universally liked" and "is virtually omnipresent in the Philippine music industry today," the Magsaysay foundation said. (AP)