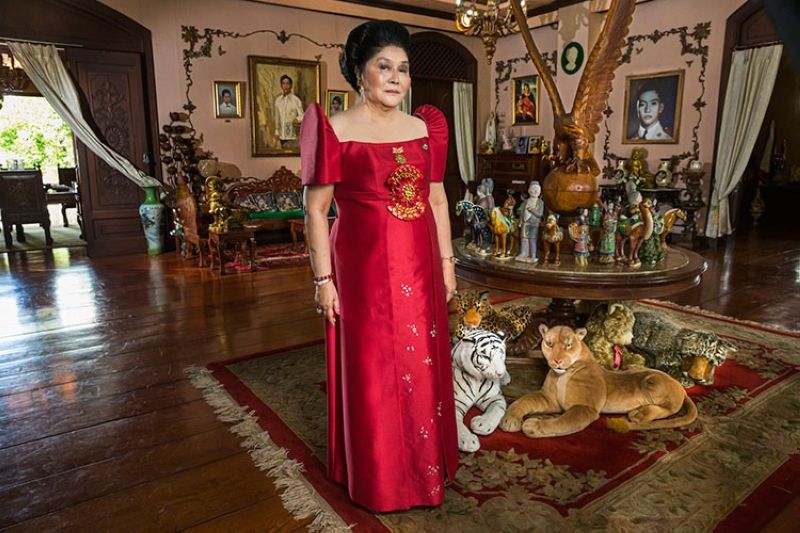 MANILA. This image released by Showtime shows Imelda Marcos from the documentary "The Kingmaker," which premiered at the Venice International Film Festival. (Lauren Greenfield/Showtime via AP)

VENICE, Italy -- Documentary filmmaker Lauren Greenfield started interviewing former Philippine first lady Imelda Marcos four years ago thinking that it might be a redemption story for the then 85-year-old. What she found is that Marcos was not only standing by the controversial history of her family but defending it as well.

Imelda Marcos's husband, the late Philippine dictator Ferdinand Marcos presided over the country for 20 years and declared martial law in 1972, which ultimately resulted in his being ousted by an army-backed "people power" revolt in 1986. He died in self-exile in Hawaii in 1989 but Imelda Marcos and her children returned to the Philippines where many have been elected to political office.

"I started it attracted to Imelda Marcos because she was an iconic reference in the work I was doing on wealth," Greenfield said Friday in a press conference. She'd heard about extravagances — her 3,000 pairs of shoes and the island she turned into a wildlife sanctuary for exotic animals — but came to understand that there was another story brewing beyond the decadence.

"I was taken in with her story and her history," Greenfield said. "(But I) soon realized that the political comeback story was what I wanted to focus on."

The film chronicles Marcos' efforts to help her son Bongbong win the vice-presidency. It helped inform the title, "The Kingmaker," which she landed on a year into editing.

"It would be like (Richard) Nixon coming back and running for re-election," Greenfield said. "I was amazed that this family ... was welcomed back and into public office."

For Greenfield, known for documentaries like "The Queen of Versailles" and "Generation Wealth," it was a unique experience working with an "unreliable narrator" and she struggled with how to tell the audience that some of what Marcos was saying was incorrect. She also said he found Marcos, now 90, to be generous and kind and candid. She said Marcos has not yet seen the documentary.

"I think she is extremely confident about her story, her place in history and her legacy and that's what I wanted to hear from her," Greenfield said. "People have treated Marcos as a laughable figure. (It) reminds me of how we didn't take (Donald) Trump seriously, and I think she often has the last laugh."

"The Kingmaker" will be in theaters this fall and on Showtime in 2020. (AP)