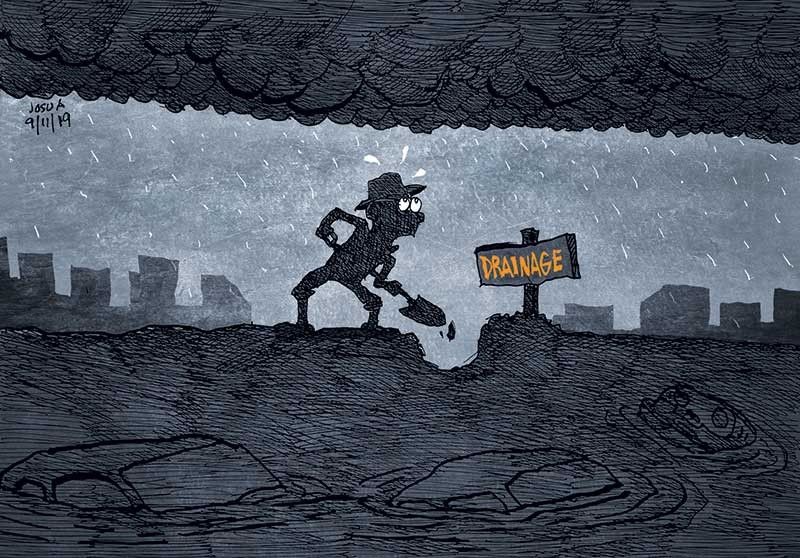 ON SEPT. 1, 2019, tropical storm Liwayway’s downpour raised a rather surreal body of water right at one end of the Mambaling flyover. The few brave souls tried to drive through the waist-deep water, but those with smaller cars were simply overwhelmed, their engines steaming to a halt, they had to be pushed by bystanders who waded through water. The water rose so quick into the few first minutes of the downpour, freezing long queues of vehicles on both lanes.

A good number of residents nearby took to the water for some reasons. For one moment, it must have been how it looked like in the scriptural baptism scene in Aeon “because there was much water there,” to quote John 3:23.

That terrible flood is going to be the new normal from hereon, each time the heavens haul out barrels most especially in the last few months of this year. No small thanks to the failed implementation of a P15 million road-widening project, which had the most relevant drainage component, by the Department of Public Works and Highways (DPWH) 7.

The project should have preceded the underpass construction. Project engineer Roy dela Cruz of DPWH 7 said flooding in Mambaling could have been avoided had the drainage been properly set.

“Supposed to be, we have a project for the widening to include the drainage system there, but there was a failure in bidding. So we just proceeded with the construction of the underpass,” said dela Cruz.

There was also P18 million to improve the drainage system perpendicular to the underpass. It could have led rainwater to Tagunol St. in Barangay Basak Pardo.

What hampered the implementation of the P15 million project was a failure in bidding. It could not be started unless the road right-of-way was settled.

So here we are now, shortchanged yet again by sloppy government work with no hint of accountability on anyone. Taxpayers suffer, and no one is punished for not doing their job.