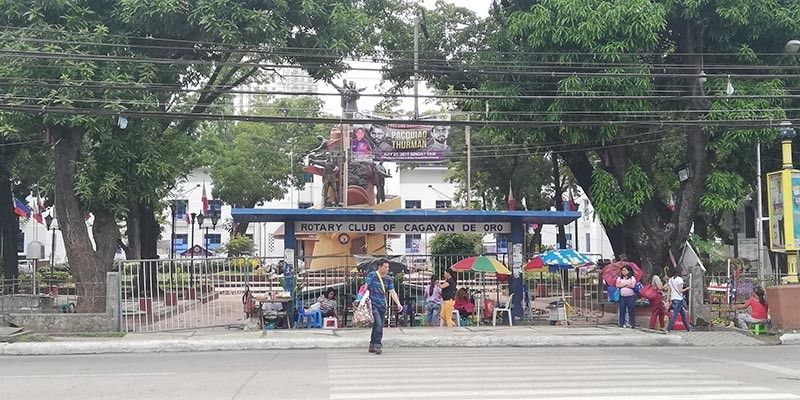 CAGAYAN DE ORO. Ambulant vendors opted to sell outside the fenced part of the Capitol park. There is still no clear date when the recreational park will be opened. (PJ Orias)

THE Vicente de Lara Park has been closed for almost three months now and it will remain unavailable for public use until the police say so, Misamis Oriental Governor Yevgeny Emano said Monday, September 9.

Emano said his decision to open the park will depend upon the recommendation of Police Provincial Director Robert Roy Bahian and the Provincial Peace Council (PPOC).

The governor, however, refused to give a timeline or possible date for the reopening of the park, as he did not want to speculate.

Asked why the police decide the opening of the capitol park, Emano said because police have the intelligence.

The closure came after the Provincial Government ordered Lumad evacuees to leave the park where they have been residing for over a year.

The Capitol then conducted a massive clean-up in the vicinity after complaints on sanitation.

The closure meant no livelihood for ambulant vendors and no chess games for chess enthusiasts, among others. For them, the Capitol park is not only a recreation spot for the public but was a tourist attraction for tourists.

Currently, police officers are deployed within the vicinity to prevent attempts from evacuees to get back in the park.

Police Colonel Roy Bahian, meanwhile, said they are set to send the recommendation to Emano this week.

"My recommendation is not to open until capitol perimeter will be rehabilitated first and putting perimeter fence, with entrance and exit gates, and with guards," Bahian said.