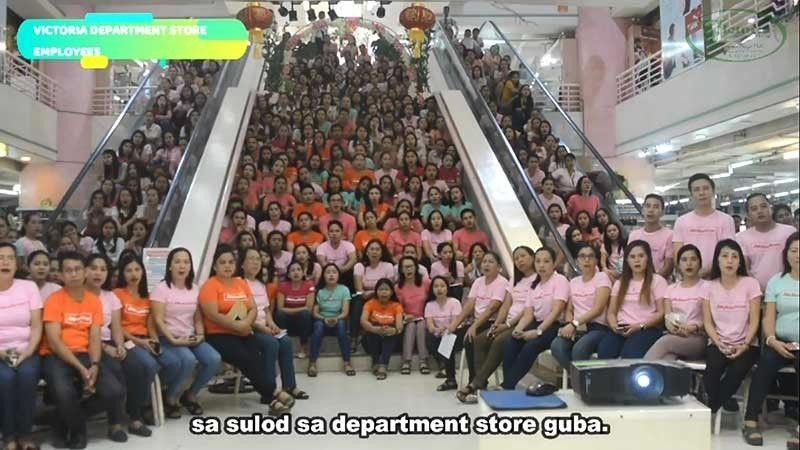 DAVAO. Screenshot taken from the video of Archie Osnan showing the employees of the Victoria Department Store. (File photo)

AUTHORITIES are currently investigating the complaint of the employees of a department store inside a prominent mall who went viral online for airing their complaint to the management due to its inadequate action in addressing their ventilation problem.

Employees of the Victoria Department Store aired their sentiment in a Facebook video uploaded by Archie Osnan on Friday, September 6, asking the management of the New City Commercial Center (NCCC) to give them temporary ventilation after air conditioners were fully shut down for the past six months.

Department of Labor and Employment (Dole) assistant regional director Jason Balais, in an interview with DXGM Super Radyo Davao, on Monday, September 9, said they will be conducting a site inspection inside the mall to double-check if the management complied with the Occupational Safety and Health Standard.

According to Article III, Section 4a of the Republic Act No. 11058 or an An Act Strengthening Compliance with Occupational Safety and Health Standards and Providing Penalties for Violations Thereof, states that employers are to “equip a place of employment for workers free from hazardous conditions that are causing or are likely to cause death, illness or physical harm to the workers”.

Villafuerte also said every establishment should have a conducive ventilation as it would affect the health situation of the employees and the customers.

“There is a possibility na maka-acquire tayo ng sakit since close man ang ventilation. Most especially for those persons with respiratory tract infection,” she said.

Victoria Department Store employee Alicia Maramion said the NCCC management has not personally communicated with the employees right after the viral post.

Maramion said they have been trying to file a communication letter to the management, stating their demands for a proper ventilation.

However, she said the administrative staff inside the NCCC Mall VP did not accept their letter and advised them to personally file it at the main office at Gempesaw Street.

“Unsaon namo pagpadayeg sa amo side kung wala’ y muatubang namo. Ngano dili nila i-receive. Basin kutob ra sab na ubos ug dili nila isaka sa tag-iya among letter (How can we explain our side if they won’t face us? Why won’t they accept our communication letter? Also, we are worried that our letter won’t reach to the owners of the mall),” Maramion told Sunstar Davao in a phone interview.

She added that they heard some mall guards saying that the department store will be padlocked after the incident.

“After nag-viral among post, amo madunggan sa mga guard is i-padlock ug putlan daw mi og kuryente. Unsaon namo pagpaninda kung wala mi kuryente? (After our post went viral, we’ve been hearing from the mall guards that the admin threatened to padlock the store and cut our power source. How can we operate if they will cut our power?),” she said.

Maramion, an employee for 20 years, said that the administration would still hear their side.

She added the administration should give them a time frame as to when their employment will be effective so that they could earlier look for a new employer.

The management, earlier, said they already started the repair and improvement of the mall’s mechanical, electrical, and plumbing facilities.

NCCC also said the mall already have poor air-conditioning system prior to the management’s acquisition last March 27 this year.