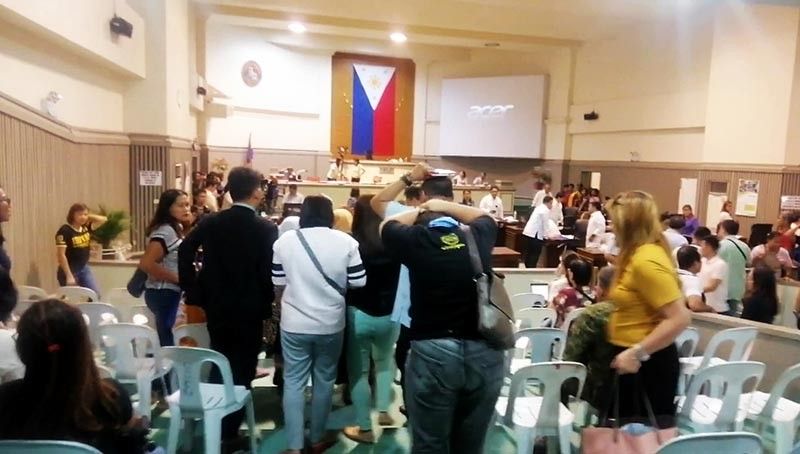 AN EARTHQUAKE on Tuesday, September 10, resulted to the early adjournment of the 19th Davao City Council regular session at the Sangguniang Panlungsod (SP).

Based on the earthquake advisory of the Philippine Institute of Volcanology and Seismology (Phivolcs), a 5.8 magnitude struck the east of Governor Generoso, Davao Oriental at 1:39 p.m.

The council was deliberating some items for the third and final reading, which were approved, when the earthquake struck at 1:40 p.m.

City council majority floor leader J. Melchor Quitain Jr. ordered for the recess of the session and asked everyone in the hall to evacuate.

After a few minutes, acting City Vice Mayor Alberto Ungab, who serves as the acting presider of the Council, adjourned the session for “safety purposes.”

Quitain, in an interview, said the meeting was adjourned due to fear of aftershocks.

“One of the recent disasters we’re seeing in the news is what we were afraid of. It’s safer for everybody since we do not know if there will be any aftershocks,” he said, adding they compromise the safety of the people inside the session hall.

The councilor said it was considered a safety measure since the building’s structure is more than 30 years old.

He also noticed the sirens inside did not alarm.

Quitain added that there were also some who did not follow the earthquake evacuation procedure of “duck, cover, and hold”.

Although he said that sometimes people would be “mentally blocked” during the situation, he said everyone should still be reminded to follow the safety procedure.

Meanwhile, Quitain said that the adjourned session counted already as the second session for the month of September. He said they will still have to deliberate for a possible special session within the week.