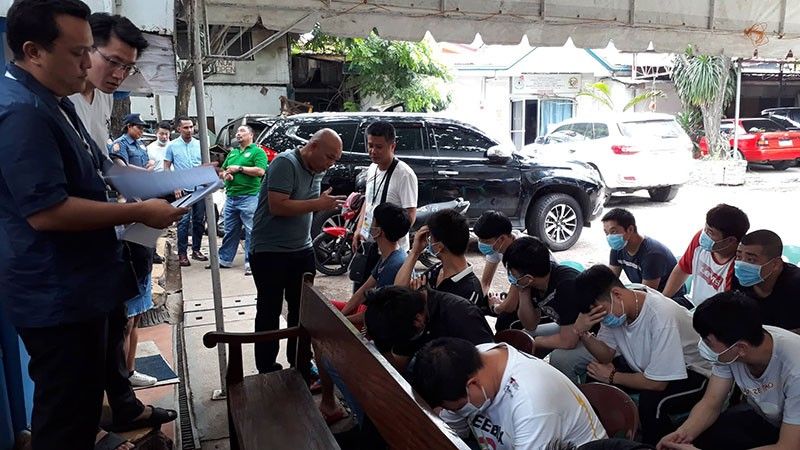 TENT INQUEST. Some of the 181 Chinese nationals apprehended by the Criminal Investigation and Detection Group (CIDG) 7 for alleged illegal online gambling operations in Lapu-Lapu City try to hide their faces during an inquest proceeding held in a tent outside the CIDG 7 office in Cebu City. (SunStar Photo/Benjie Talisic)

THE Chinese workers for an alleged illegal online gambling establishment in Lapu-Lapu City were charged and subjected to inquest proceedings on Tuesday, Sept. 10, 2019.

A team of Lapu-Lapu City prosecutors visited the Criminal Investigation and Detection Group (CIDG) 7 office in Cebu City to conduct the inquest—a summary inquiry that is meant to check if the warrantless arrest of foreigners can be justified by probable cause.

The CIDG 7 operatives caught 181 Chinese nationals in an establishment in Lapu-Lapu City last Saturday morning, Sept. 7. They were not brought to the prosecutor’s office because the CIDG 7 office is far.

The foreigners were charged with violating Presidential Decree 1602, which sets stiffer penalties on illegal gambling, and Republic Act 10175, or Cybercrime Prevention Act of 2012.

Prosecutor Shiela Mar Abadia said they did not violate the law in conducting the inquest at the CIDG 7 office as they were dealing with foreigners, who could not speak English.

The CIDG 7 and the prosecutor’s office hired a translator, also a Chinese national, to help in the inquest.

Abadia said she and her fellow prosecutors would evaluate if the warrantless arrest of the Chinese nationals were valid.

As of Tuesday, the company that employed the foreigners failed to show working permits.

The Police Regional Office (PRO) 7 got an information that the Department of Labor and Employment (Dole) had given the company a permit before the CIDG 7 raid happened.

However, PRO 7 Director Debold Sinas said the Dole’s permit does not matter as the search warrant states that the company operates an illegal online gambling activities. He said the foreigners could be released from the CIDG 7 if they post bail. (from AYB of Superbalita Cebu/KAL)