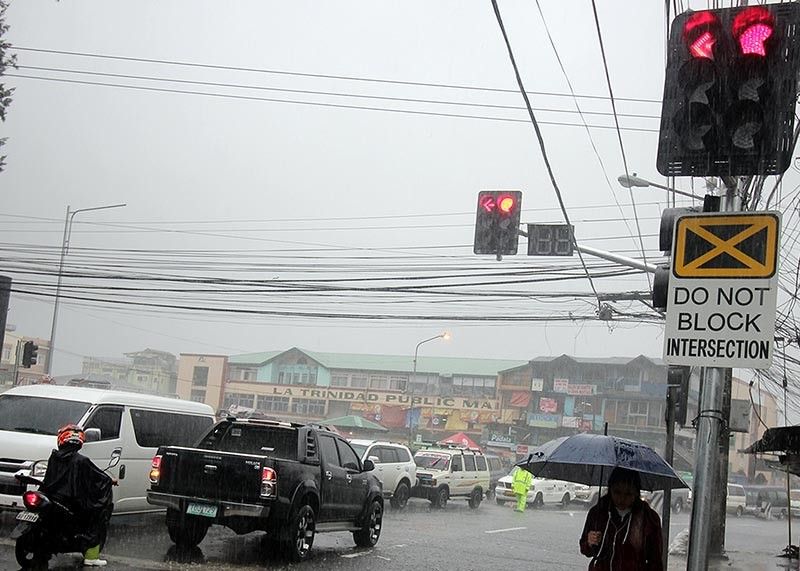 FUNCTIONING. With the installation of the first traffic light along Halsema Highway, La Trinidad officials wants to fine motorists disobeying the stop light at the junction of Km. 5 and Pico Road. Photo by Jean Nicole Cortes

LAWMAKERS in La Trinidad, Benguet are pushing for corresponding penalties to violators of the only traffic lights along Halsema Highway.

Authored by councilors Francis Lee and John Botiwey, the proposed measure was passed on second reading.

“The enactment of an ordinance relative to the assisted traffic control management system will now give our traffic enforcers the outright authority to manage our roads with dignity,” the proposed ordinance reads.

The traffic lights located at Kilometer 5 are now fully operational.

“With the ordinance, we can apprehend violators and as an addition to revenue code,” Lee said.

The councilor added a P1,500 penalty is being proposed for first offense violators, followed by P2,000 for second offense and P2,500 for third and succeeding offenses.

To date, the Traffic Management Unit of La Trinidad Municipal Police Station (LTMPS) oversees the operation of the traffic light.

The proposed measure, known as the “La Trinidad Electronically Assisted Traffic signs and signals ordinance” directs every person driving a motor vehicle to observe at all times the instruction for traffic lights.

In times were the traffic lights are ineffective due to technical problems and power interruptions, manual signals will be made by authorized traffic enforcers.

The municipal engineering office is tasked to install and maintain traffic management signs and signals along areas to be identified by the Traffic Management Board.

The board is also authorized to monitor and evaluate the operation of traffic management system and its effect to the traffic flow.

Under the ordinance, the La Trinidad Traffic Management Section including the members of the Municipal Auxiliary Traffic Enforcers are tasked to implement the provisions of the proposed measure.