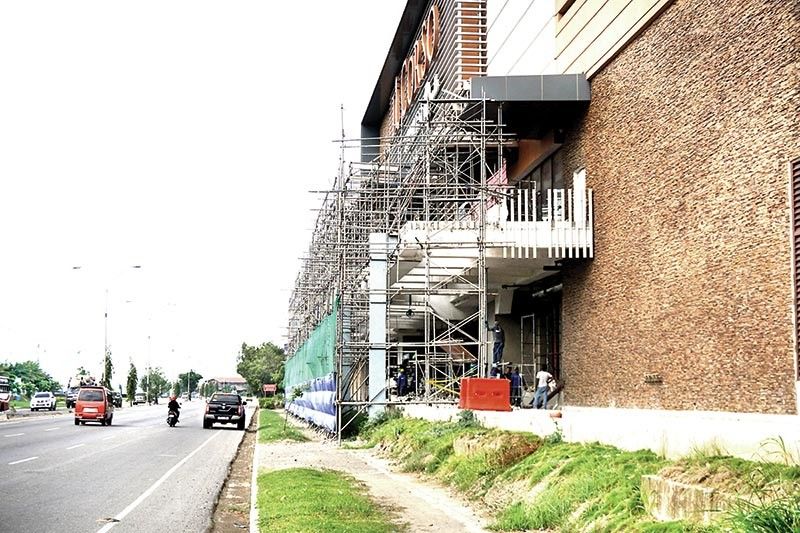 SETBACK: Filinvest Land Inc. starts knocking down the eight columns of Il Corso Mall that are pitched beside the sidewalk at the South Road Properties in Cebu City. The National Building Code requires an eight-meter setback for commercial, industrial and recreational buildings along newly developed thoroughfares. (Photo by Alex Badayos)

FILINVEST Land Inc. (FLI) has started demolishing the eight posts of its Il Corso development at the South Road Properties (SRP) in line with the Cebu City Government’s campaign to clear public areas of obstructions.

The dismantling of the posts was in fulfillment of FLI’s promise made last July to comply with Mayor Edgardo Labella’s orders.

The affected part of the structure has scaffolding and debris netting to prevent dirt, concrete and scrap metal from falling to the streets.

Jose Daluz III, SRP manager, said Tuesday, Sept. 10, 2019, he was happy with the action taken by FLI to fulfill its earlier promise. “That will show the good relationship between the City Government and FLI,” he said.

In July, after FLI agreed to demolish the posts, Mayor Labella said, “I thanked the management of Filinvest for heeding right away our directive to remove the columns and follow the existing laws, especially on the setback requirement.” Section 804 of the National Building Code provides that for commercial, industrial, institutional and recreational buildings along newly developed thoroughfares, the required minimum setback for land with widths of 30 meters and above is eight meters.

FLI said at first that it had followed all the requisites before it constructed Il Corso, including getting the approval of the Office of the Building Official and the Department of Public Works and Highways for the construction of the “eight advance footbridge posts.”

FLI said the eight columns are in preparation for the construction of “a footbridge that will link Il Corso mall to the residential communities across within the 40-hectare Citta di Mare township project.” It later agreed to comply with City Hall’s order.

While the issue of the obstruction is being addressed, City Hall will still pursue its action to rescind the lot purchase by FLI four years ago.

The rescission of the sale would not affect FLI’s 40-hectare Citta di Mare development, a joint venture with the Cebu City Government.

In 2015, the SM-Ayala (Land Inc.) consortium and FLI were declared winning bidders in the 45.2-hectare lot sale in the SRP. Of the 45.2 hectares, the SM-Ayala consortium bought 26 hectares, while FLI bought 19.2 hectares. The buyers have initially paid P8.3 billion to the City out of the P16.76 billion total sale price.

When Tomas Osmeña became mayor in 2016, he said he would rescind the contract of sale with the three developers, saying the transaction was illegal. Osmeña said Michael Rama, mayor at the time of the sale, was not authorized by the City Council to sell the lot.

FLI cooperated and rescinded the sale. SM and Ayala did not.

Labella had said his administration will honor the rescission agreement between FLI and Osmeña.

Daluz said Tuesday the City cannot accept the P2.455 billion that represented the second and final payment of FLI after it gave a 50 percent downpayment for the 19.2 hectares.

“Maigo man ta sa COA (Commission on Audit) kon ato lang ning dawaton ang ilang kwarta because daghan nang violation based on the contract sa FLI and we have to settle this first. Naay mga penalties and interest diha kay sila man ang wala mobayad,” Daluz said. (We can be questioned by COA if we receive the payment because the FLI has violations that have to be settled first. There are penalties and interest which it did not pay.)

SunStar reached out to FLI for comment on Daluz’s statement but no reply was received by 8 p.m. Tuesday.